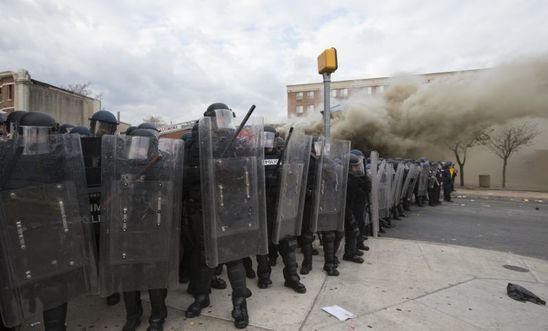 Amnesty International USA is sending a human rights delegation to the city of Baltimore today to observe police and protester activity in the wake of the death of Freddie Gray in police custody. The delegation will be monitoring compliance with human rights standards during the policing of protests.

“We are calling on the police in Baltimore to exercise restraint, and to ensure that peaceful protesters can assemble and the media can do its job without undue interference.

“Confronting protesters in a manner more appropriate for a battlefield may put law enforcement in the mindset that confrontation and conflict is inevitable rather than possible.

“Our delegation of independent human rights observers will be seeking to ensure that police protect the right of the people to peacefully assemble, and that only the minimal amount of force necessary is employed if violence occurs. Excessive force, such as tear gas, should not be used to curtail the rights of a non-violent majority in order to quell the acts of a few.”

Yesterday Amnesty International USA sent a letter to the Baltimore Police Department to express concern over the death of Freddie Gray and the use of tear gas at protests demanding accountability for his death.

For an Amnesty USA overview of best practice on the policing of protests, go here.