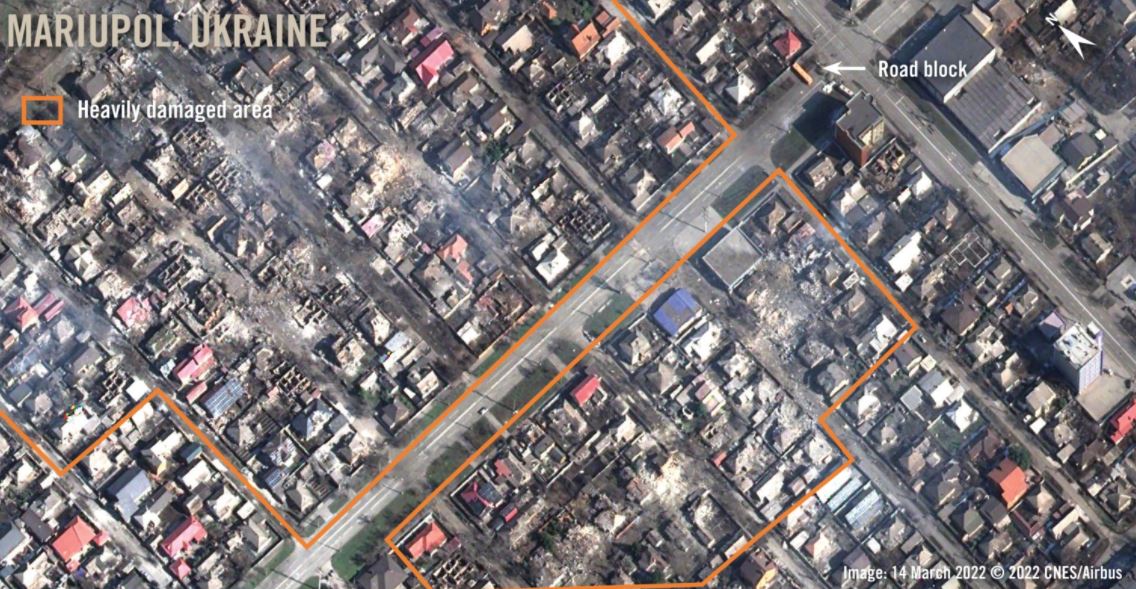 Researchers spoke to people who experienced sieges in five cities, including Kharkiv and Mariupol

‘It has become my new reality - shootings and bombings, helping old women out of the rubble, no gas, no water, no electricity’ - man running bomb shelter in Kharkiv

For the first time, Amnesty field investigators in Ukraine have independently verified physical evidence of banned cluster munitions, the use of which violates international law.

They have also collected testimony documenting Russian siege tactics - including unlawful indiscriminate attacks, disruption of basic utilities, cuts to communication, destruction of civilian infrastructure, and restrictions over access to medicine and healthcare.

Amnesty conducted in-person and remote interviews with people who experienced sieges in five cities, including Kharkiv and Mariupol. Amnesty’s Crisis Evidence Lab analysed relevant satellite imagery and verified videos and photos of the incidents described below.

In Kharkiv, Russian forces reached the northern suburbs in the first days of the invasion and almost immediately implemented siege tactics, attempting to encircle the city and firing inaccurate weapons into populated areas. Amnesty has documented a broad pattern of unlawful indiscriminate attacks across populated areas in Kharkiv. On 28 February, three MLRS salvos struck the northern part of the city and killed at least nine civilians, including children, and wounded at least another 18.

In an attack on the morning of 4 March, Olesky Stovba, a 41-year-old father, was injured by a cluster munition while buying groceries in the city’s Mala-Danylivka district. He told Amnesty:

“We found some food, and we stood outside the food shop and I heard a great sound. I turned myself and I saw a lot of little fire. It was the height of my knees, 50 metres from me. I fell down, and my wife too, and I felt something hit my right leg … I pulled down my trousers and saw lots of blood.”

Surgeons later removed three fragments from his groin, calf and foot. Amnesty’s weapons investigator examined the physical evidence and confirmed the largest fragment was from either a 9N210 or 9N235 cluster munition.

Kharkiv’s Saltivka district has been repeatedly targeted during the siege of the city. Amnesty investigators verified 22 incidents in Saltivka, showing damage to various civilian areas including schools, residential blocks, food markets and a tram depot between 27 February and 16 March. Photos show remnants of Smerch rockets and cluster munitions.

One man*, who has been running a bomb shelter in Saltivka, told Amnesty:

“It has become my new reality - shootings and bombings, helping old women out of the rubble, no gas, no water, no electricity. Once every three days, we boil ice for water. There are 300 people in the shelter. The majority are older, fragile, [they have] asthma, diabetes. There are some who haven’t left the shelter in three weeks. The biggest problem in Saltivka is that the elderly die for lack of medicine, from shock, from a heart attack. It is important to get them in the ground and bury them, it will get warmer soon and they will decompose.”

“A defining feature of these cruel sieges is Russia’s relentless indiscriminate attacks, which cause utterly devastating harm over time

“For five weeks now, civilians across Ukraine have seen their cities razed day by day.

“Our on-the-ground research has documented how some of Ukraine’s most at-risk people are disproportionately suffering as these brutal siege tactics continue.

“Civilians trapped in cities under siege must urgently have access to humanitarian corridors to enable the safe evacuation of all who wish to leave.

“Humanitarian supplies must also be allowed to reach those who remain behind.”

Strike near a school in Lviv

In a shelter in Lviv, Amnesty researchers interviewed a 16-year-old girl who had been evacuated alone from Kharkiv. Amnesty verified a photo showing the remains of a 220mm Uragan rocket that struck close to her family’s apartment complex, which is near a school. She told Amnesty:

“The missile struck at night, and I smelled the fire and felt the waves. All of my family, we all live in the corridor of the apartment building from the first day of the war.”

Amnesty has previously confirmed that cluster munitions killed a child and two other civilians taking shelter at a preschool in Sumy Oblast, and documented an airstrike that killed civilians queueing for food in Chernihiv.

Cut-off from the outside world

Communication with civilians in besieged cities is extremely difficult due to disrupted mobile and internet services. Many people spend the majority of their time in underground bomb shelters with very weak or no signals.  Access to communications and the internet are essential for safety, and for access to vital information regarding possible evacuation routes.

In the cities of Kharkiv and Izium, compounds containing TV towers have been damaged by Russian attacks. Open-source research and satellite imagery analysis by Amnesty shows that Kharkiv's TV tower compound was likely to have been damaged twice between 27 February and 17 March, and service outages were reported from 6 March. A building associated with Izium’s TV tower was damaged on 12 March, then further damaged as of 20 March. Open-source reports again confirmed disruption to broadcasting. Many older residents rely on television for news and for emergency information from the government.

Amnesty has previously documented how civilians in Izium are on the brink of a humanitarian disaster as Russian forces have bombarded the town since the invasion began.

Older people and those with disabilities

The conflict continues to have a significant impact on older people and people with disabilities, which siege warfare further exacerbates.

Alexander Mihta, a 39-year-old in Kharkiv, is diabetic and has severe difficulty in walking. He drove his wife and daughter to the Polish border, but then had to stay in Ukraine following the implementation of martial law. His apartment building in Kharkiv was struck by Smerch rockets, which smashed steam pipes, cutting heating and flooding the lower floors. Amnesty investigators verified 21 photos that confirmed damage to the residential building.

Mihta later escaped to a shelter in Lviv with his father. He told Amnesty:

“The shelling worsened the whole time. I needed food, so I left and went to shop. I have diabetes and I ran when the shelling worsened, and I twisted my leg. I was trying to get to the bomb shelter but couldn’t. I broke six bones, and they [doctors] want to amputate.”

Amnesty also interviewed a 61-year-old woman* who has stayed in Kharkiv to care for her 84-year-old mother who has dementia and is unable to travel. She said:

“The old people, we are staying. My mother can hardly move … We are from Luhansk and had to get my mother from Luhansk … We left for my daughter’s flat in Kharkiv and we are stuck here. One in every 24 hours we spend outside. I talk to my mother. I take her to the toilet and help her undress. I have to always explain to her why we are in Kharkiv, and why we are in the basement. She has dementia and always forgets why she is in the basement, and I have to tell her all day long. She used to have a decent life, she could walk in the garden. Not anymore.”

Older people and people with disabilities, as well as other groups who may face particular risks and challenges when fleeing, should be prioritised for evacuation, as specified in international humanitarian law. Planning and communication about evacuations and safe humanitarian corridors must also be undertaken in an inclusive way, including by ensuring that information, transportation and services are all accessible.

Note to editors: *Some names have been omitted for security reasons.