Ukraine: Russia's invasion is 'crime of aggression' under international law 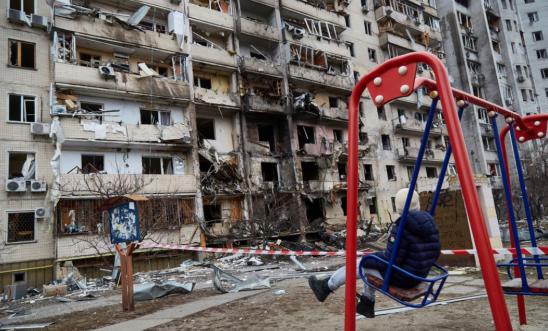 Call on all countries to condemn Russia’s act of aggression

Russia’s invasion of Ukraine is a clear violation of the United Nations Charter and an act of aggression that is a crime under international law, said Amnesty International, as it called for all those involved in this crime to be held accountable.

Emphasising the gravity of the Ukraine crisis, Amnesty has called on UN member states to uphold and defend the UN Charter, which prohibits the use of force against the territorial integrity or political independence of any state.

The only exceptions to those provisions are self-defence and where such use of force as is authorised by the UN Security Council - neither of which applies to this crisis.

Amnesty is also stressing that, under international law, it is incumbent on all states to settle international disputes by peaceful means and in such a manner that international peace, security and justice are not endangered.

The invasion of Ukraine has already resulted in indiscriminate strikes on residential areas, medical institutions, social infrastructure and other civilian objects and infrastructure, leading to many civilian deaths and injuries. It has also led to mass displacement and destruction of civilian housing.

Amnesty has urged UN member states to stand together in condemnation of Russia’s crimes of aggression, to provide relief and assistance to the citizens of Ukraine including those fleeing the conflict, and to ensure the consequences of Russia’s aggression are not allowed to push the world closer towards further violence and insecurity.

Russia’s military intervention in Ukraine appears to meet the definition of aggression under the Rome Statute of the International Criminal Court. Article 8bis(1) of the Rome Statute defines a “crime of aggression” as “an act of aggression which, by its character, gravity and scale, constitutes a manifest violation of the Charter of the United Nations”.  Although the court, barring an unlikely Security Council referral, will not have jurisdiction over the crime of aggression, in this situation a number of states - including Ukraine - have domestic laws that would allow prosecution of those responsible for this crime.

“Russia’s invasion of Ukraine is grave, severe and defined by one characteristic only: aggression.

“Russia is invading into the heart of Ukraine, seeking to depose its lawfully-elected government, with a real and potential massive impact on civilians’ lives, safety and well-being; its acts cannot remotely be justified on any of the grounds that Russia has offered.

“In less than a week, Russia’s invasion of Ukraine has triggered a massive human rights, humanitarian and displacement crisis that has the makings of the worst such catastrophe in recent European history.

“Russia is not only breaching the sovereignty of a neighbour and its people, it is also challenging the global security architecture and exploiting its frailty, including a dysfunctional UN Security Council.

“There are long-lasting consequences from this for us all. We must not allow aggression and violations of international law to be their architect.

“Russia’s flagrant disregard cannot be allowed to embolden others to follow suit and nor should the UN’s ability to contain such behaviour be undermined.”

Yesterday’s welcome announcement by the ICC Prosecutor that his office will seek to open an investigation into Ukraine puts all perpetrators of war crimes and crimes against humanity in Ukraine - including those in senior positions and therefore most responsible - on notice that they will be held individually accountable.

Serious violations of the rules of conflict constitute war crimes. Some of these are codified as such by the Rome Statute of the International Criminal Court. The ICC would have jurisdiction over war crimes committed in Ukraine, which made a declaration in 2015 that it accepted ICC jurisdiction over crimes committed on its territory since 20 February 2014. Russia signed the Rome Statute in 2000 but withdrew its signature in 2016.

“Amnesty International calls on all state parties to the ICC and the international community at large to cooperate with the ICC’s investigation.

“At this early stage, the collection and preservation of evidence is crucial to successful future investigations.”