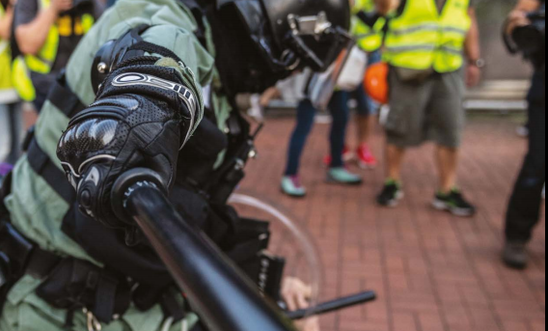 Robust controls are needed on the trade in policing equipment such as handcuffs, pepper spray and Tasers © Vernon Yuen/NurPhoto/Getty Images

Amnesty International is calling on the UK government to make a formal statement of support for a global ban on the trade in equipment used for capital punishment or torture as the UK leaves the current EU system which regulates the “torture trade”.

With the UK about to withdraw from the European Union, there is currently no agreement in place for the UK to coordinate with other countries in the EU over future rules on the trade in equipment for capital punishment and torture. Currently, EU-wide coordination occurs via a specific piece of EU law (Regulation (EU) 2019/125).

The EU regulatory system bans any export of equipment such as gallows and thumb-screws, while requiring a system of strict national “controls” on policing and security equipment such as tear gas and pepper spray to prevent them being sold in cases where it is likely they would be used for torture or other cruel and degrading treatment.

Campaigners fear that unless the UK aligns itself with a planned new international agreement on the torture trade, there could be an erosion of checks and controls over what equipment UK companies may attempt to export in the future.

Amnesty and Omega are presenting an “Anti-Torture Trade Framework” to the United Nations today ahead of a high-level meeting on the “torture trade”. Dozens of UN member states are meeting to discuss plans for a possible new global agreement on the torture trade. As part of this Amnesty and Omega are calling for a ban on inherently abusive equipment - such as spiked batons, electric-shock belts and weighted leg irons - and robust controls on the trade in policing equipment such as handcuffs, pepper spray and Tasers.  Amnesty and Omega are also calling for a complete ban on the trade in death penalty equipment such as gallows and electric chairs, and for export controls on dual-use pharmaceutical chemicals to prevent their use in lethal injection executions.

In a new 39-page report - Ending the Torture Trade: The Path to Global Controls on the ‘Tools of Torture’ - Amnesty and Omega outline how the “torture trade” currently results in horrific human rights abuses (see below).

“Untethered from the EU’s wider joint systems banning the torture trade, there’s a danger the UK’s torture trade controls could be left weakened and diminished in the future.

“We’ve previously seen examples of where grisly pieces of torture equipment were being advertised at arms fairs in the UK, and that’s exactly what musn’t be allowed to happen again in the future.

“On the day the UK leaves the EU, the Government should publicly commit to supporting UN efforts to set up a new global system banning the sale of grotesque things like gallows and thumb-screws, and tightly regulating equipment such as tear gas and pepper spray.”

Police forces around the world have used a range of equipment and weapons outside of custodial settings in a way that may have constituted torture or other ill-treatment. This includes the repeated targeting of peaceful protesters with rubber or plastic bullets and other potentially lethal projectiles, resulting in serious injuries and loss of sight. It also includes the gratuitous and punitive use of chemical irritants such as pepper spray against individuals posing no threat, and the use of large quantities of tear gas in confined spaces.

For example, on 9 September, Javier Ordoñez was stopped by police in Bogotá, Colombia, for allegedly violating COVID-19 restrictions. Officers pinned him to the ground and administered repeated Taser electric shocks to his body for approximately five minutes. He died in hospital hours later as a result of blunt trauma injuries. In Saudi Arabia, an Ethiopian detainee, Solomon, recently told Amnesty that prison guards had used electric-shock devices against him after he protested about a lack of health care.

Amnesty and Omega are calling on states to use the Anti-Torture Trade Framework to introduce regulations - or strengthen existing national controls - on the trade in goods used for capital punishment, torture or other forms of ill-treatment. Tighter controls on law-enforcement equipment should include issuing licences on a case-by-case basis, following proper risk assessments.

“More than three decades after torture was outlawed internationally, people continue to be tortured, often to death, in prisons and detention centres all over the world. It is nonsensical to ban torture while allowing the trade in sinister equipment specifically designed for torture, like spiked batons and leg irons, to continue. Standard equipment like handcuffs and batons can be instruments of torture if they fall into the wrong hands. Countries must come together to create a global, legally-binding instrument to regulate the trade in these goods.”

“For too long, states have turned a blind eye to the trade in ‘tools of torture’, allowing companies throughout the world to profit from human pain and misery. All states have a responsibility to act decisively to bring this trade under control. Our Anti-Torture Trade Framework provides them with the basis for effective action - individually establishing national restrictions, and collectively agreeing international standards through the ongoing UN process.”

Downloads
Ending the Torture Trade: The Path to Global Controls on the ‘Tools of Torture’