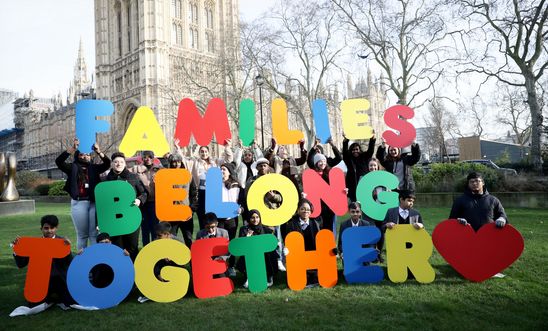 Children, refugees, activists and MPs held a demo at Westminster before delivering petition to the Home Office

A Families Together demonstration urging the Government to reunite child refugees with their parents took place at Westminster today.

Campaigners, school children from Oaklands Secondary School in London’s Bethnal Green, young refugees from the VOICES Network and Angus MacNeil MP held up large multi-coloured letters spelling out ‘FAMILIES BELONG TOGETHER’ before making their way to the Home Office to hand in a 75,000-strong petition, urging the Government to change cruel refugee family reunion rules which block children in the UK from reuniting with their families.  Activists also held placards which said ‘Families Together’ and ‘75,000 call on Government to act now’.

Last month following amendments to the European Union (Withdrawal Agreement) Bill, the Government stated: "protecting vulnerable children will remain our priority after Brexit”. The Families Together campaign is calling on the Government to ensure reuniting child refugees in the UK with their families is included in this priority.

“More than 75,000 people across the country are demanding change to the wilful and damaging rules that prevent child refugees from being reunited with their loved ones.

“The new Government has stated that protecting vulnerable children remains their priority after Brexit – we urge them to make good on this promise to prevent any more needless suffering, for child refugees in the UK.

“Today, school students from Bethnal Green took a stand for refugee children in the UK by sending a clear message to the Government that no child should be blocked from seeing their parents and siblings.”

“Preventing refugee children from reconnecting with their families not only flies in the face of international law, but also blights the many young lives that are already destabilised by trauma, isolation and loss.

“There is simply no good reason for imposing such a harmful restriction on refugee children and it must end now. With the backing of MPs from across the political divide, the people who work with these children and an incredible show of public support, the pressure is on the Home Secretary to do right by refugee children in Britain and let them be reunited with their families.”

A recent report by Amnesty International UK, Refugee Council and Save the Children UK exposed how current refugee family reunion rules - which block child refugees in the UK from being reunited with their families - are directly at odds with national law and a flagrant breach of international law, causing irreversible harm to children in this country.

The Families Together coalition is made up of over 50 organisations including Amnesty International UK, British Red Cross, Islamic Relief, Oxfam, Refugee Council and UNHCR.

The coalition is calling for:

With training and support, VOICES ambassadors work together to speak out about issues that affect refugees and asylum seekers. Sharing their own experiences, they advocate to change policy, use the media to change points of view and help the Red Cross improve our services through expert feedback.