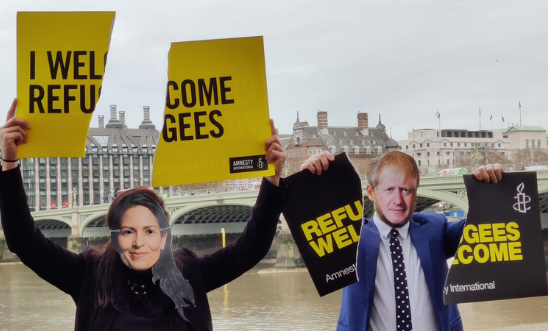 The Bill will create significant obstacles, penalties and harms to people seeking asylum in the UK

“It truly is a bleak day for refugees fleeing conflict and persecution.

“Despite widespread opposition, including on its own backbenches, the UK government today ripped up the Refugee Convention – a longstanding international agreement - and shamefully abandoned the responsibility it owes to refugees.

“The Home Secretary’s attempt to paint this Bill as targeting ruthless criminal gangs is a cynical distraction from her true intent to simply, and at whatever the cost, punish, penalise and deter people who seek asylum.

“The xenophobia that underpins this Bill is plain – it is as ruthless to victims of repression, torture and exploitation as it is exploitative of the racism and prejudice they face.

“If the asylum measures in this Bill are implemented, people entitled to sanctuary will become even more vulnerable to people smugglers and abusers while the UK’s reputation is dragged through the mud.”

The Bill includes nothing to address any of the circumstances that make people seeking asylum vulnerable to the exploitation of people smuggling gangs and other abusers - instead, it sets out to make these people more vulnerable.

By increasing people’s fear and making them more excluded and alienated - whether in the UK, on more secretive journeys to the UK or in other places – this Bill will enable criminal exploitation to continue to thrive, and even expand.

The Government persists in suggesting that it provides safe and legal routes to seek asylum in the UK. This is little more than a cynical spin.

The UK maintains immigration rules that require people fleeing countries of conflict and repression to obtain a visa to make a journey to the UK, while providing no visa for anyone to make such a journey for the purpose of seeking asylum.

It is longstanding policy – confirmed in this Bill – that asylum in the UK can only be claimed if and when someone arrives here. There is, therefore, no choice for almost all of the relatively few refugees who seek asylum in the UK but to rely on dangerous journeys - and often dangerous people - to reach this country to make their claims.

This situation applies whatever the level of connection the person may have to the UK – including those with close family living here.

The Government persists on drawing attention to schemes in the immigration rules for Ukrainians, Afghans and British Nationals (Overseas).

The schemes for Ukrainian and Afghan refugees have proved to be ineffective and inaccessible to many of the people for whom they are notionally intended.

The Home Secretary has clearly never had any genuine enthusiasm to support Ukrainian or Afghan refugees, just as she remains hostile in what she says and does in terms of providing asylum to refugees from other conflicts and repression.

The scheme for British Nationals (Overseas) from Hong Kong is, by contrast, not concerned with asylum. The rules for this scheme establish criteria that concern only nationality and relative financial wealth. Whether a person has experienced or is at risk of persecution is irrelevant to those rules. This explains why the official statistics do not include people who come to the UK under this scheme within the asylum figures.

If the UK government truly wants to encourage and support Rwanda with its relatively large refugee population and to improve its human rights record, it should not be making a deal to pass its own responsibilities on to that country.

This sends a deeply irresponsible message to Rwanda and the wider world about how the UK regards its international responsibilities and human rights duties. If other countries follow such a dismal lead, the already fragile prospects for refugees finding a place of safety will gravely diminish.

Smugglers, traffickers and other exploiters will only be more enabled to thrive because more people need to move in the hope of finding safety; and more of these people seek to avoid authorities and are thereby made even more at risk of exploitation.

Backlogs in the system

Ministers have emphasised the Bill is aimed at alleviating an asylum system that they say is under pressure, even though the UK’s system continues to receive relatively few claims. In truth, the UK is far behind many European neighbours, such as France and Germany, in terms of the volume of asylum applications received and people afforded protection.

In fact, several provisions will add a significant new workload to the Home Office’s remit.

Instead of these oppressive new laws and rules - the Home Secretary should focus on making the UK asylum system more accessible: reducing not adding to delays and improving the quality of decision-making, so refugees young and old receive the protection of this country to which they are entitled.

Part one of the Bill includes important provisions on British nationality law, which will restore citizenship rights to thousands of people wrongly excluded from citizenship by longstanding discrimination and injustices. Amnesty welcomes these provisions. However, there are also dreadful injustices in this part of the Bill – including to withhold citizenship rights of people born, and growing up, stateless in the UK; and to empower the Home Secretary to secretly strip British people of their citizenship.