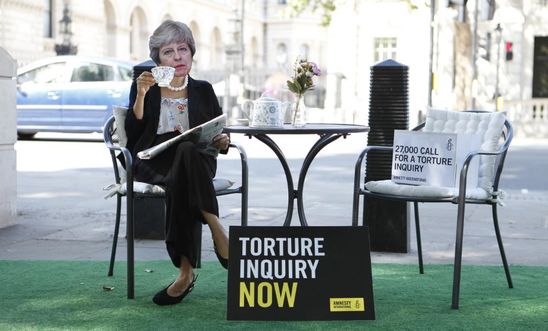 Responding to an announcement from the Government saying it will not be establishing an independent judge-led inquiry into UK involvement in rendition and torture that took place after 9/11, Amnesty International and Liberty have branded the move “disgraceful”.

Speaking in the House of Commons this morning, David Lidington, the de facto deputy prime minister, ruled out the long-delayed inquiry, originally promised by David Cameron’s coalition government in 2010.

Last year, the parliamentary Intelligence and Security Committee published two damning reports into the UK’s involvement in numerous cases of rendition and torture. The committee identified hundreds of cases where UK personnel were involved in torture carried out by other countries, including at least 13 occasions where UK personnel witnessed ill-treatment first-hand.

However, the committee also said it had been blocked by the Government from accessing all the necessary evidence and prevented from conducting a credible, thorough inquiry. In response, Amnesty and Liberty reiterated their longstanding call for a full judge-led inquiry into the issue, something the Government said it would consider. Today’s announcement is the Government’s long-delayed response to last year’s revelations.

“The Government has committed a disgraceful U-turn on its commitment to hold an independent judge-led inquiry into UK complicity in torture and rendition post-9/11.

“The fact this comes almost a year after a decision was promised, only adds insult to injury.

“Such a brazen rejection of the principles of transparency and accountability flies in the face of the UK’s claim to be human rights leader. The UK is at risk of repeating the failures of the past.

“Furthermore, the revised version of the torture guidance lacks the teeth to prevent the UK from future complicity in torture and other ill-treatment - in fact, the new version may make this more likely. The policy will only be effective if it explicitly states that ministers can never authorise torture or other ill-treatment, and requires UK personnel to publish their internal documents.”

“The Government has made a mockery of the UK’s supposed commitment to upholding the international prohibition on torture.

“This decision will seriously tarnish our reputation in the eyes of the world.

“The Government cannot claim to be a global champion of human rights when it allows its own officials to break the law with impunity.

“Ministers are wrong if they think this matter can now be laid to rest. We will continue fighting for truth and accountability, and all options are on the table as we consider our next steps.”

Today the Government also published its replacement for its “Consolidated Guidance on intelligence sharing”, following a review by the Investigatory Powers Commissioner.

Amnesty and Liberty are seriously concerned by the revised guidance. The two organisations stressed that the revised version actually made the UK’s involvement in torture and other abuse more likely, or does nothing to prevent it.

Despite stating that the UK does not participate in, solicit or condone acts of torture, the new “Principles” within the guidance leave explicit room for ministers to act in contravention of that commitment and the law. The guidance contains numerous references to ministerial discretion where a real risk of torture exists.

In May, it emerged that the Ministry of Defence departmental guidance concerning torture was secretly rewritten last year, informing UK ministers that they could share information obtained from third parties even where there is a “serious risk” of torture “if ministers agree that the potential benefits justify accepting the risk and the legal consequences that may follow”.

This secret policy on torture has alarmed campaigners. Amnesty and Liberty believe that, far from learning lessons over the need to always resist involvement in torture following the post-9/11 detainee cases, this replacement MoD guidance shows the UK is still prepared to countenance torture in certain circumstances.