UK: 'Draconian' Nationality and Borders Bill should be drastically amended 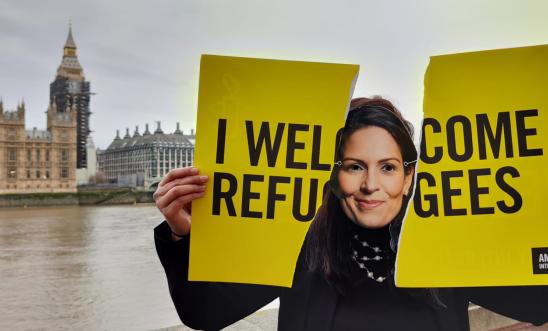 Amnesty International has called on MPs from all parties to oppose “draconian” measures on asylum contained in the controversial Nationality and Borders Bill, ahead of decisive final stages in Commons debates on the bill today and tomorrow.

If the bill is passed, warned Amnesty, it will largely shut down the UK's asylum system and punish those fleeing conflict and persecution.

Crucially, and despite numerous drownings in the Channel and other deaths at international borders, the bill fails to provide any safe and legal routes for people attempting to seek asylum in the UK.

Punitive measures in the draft legislation are also extremely unlikely to deter people from making dangerous journeys and, contrary to claims from the Home Secretary and other ministers, the proposals are thought likely to increase the resort by those seeking asylum to people-smuggling gangs - not reduce these activities.

According to the Missing Migrants Project, it’s estimated that more than 120 people have died or gone missing during attempted Channel crossings in the last five years alone. Amnesty is calling for the creation of safe and legal routes to the UK for those fleeing persecution.

“The Government’s case for the draconian measures in the Nationality and Borders Bill is entirely false.

“Ministers claim the bill will stop people making dangerous journeys, combat people smugglers and save money - none of this is true.

“If ministers were truly concerned with tackling criminal gangs and their exploitation of vulnerable people, they would work with France and others to set up safe asylum routes so that people seeking a place of safety no longer needed to rely on smugglers

“Tragically, the government seems more interested in playing politics with asylum than in fulfilling its responsibilities toward people in dire need of a place of safety.

“Despite the Government whipping up a media storm over a supposed challenging emergency, asylum claims in the UK remain around the same level as they were two years ago and much lower than in many other European countries.

“The Nationality and Borders Bill must be drastically amended and the underlying asylum plans dropped. Instead, we need efficiency and genuine humanity to fix an asylum system that the Government is making increasingly dysfunctional.”

Earlier today, Amnesty International UK staged a stunt opposite Parliament with campaigners in Priti Patel and a Boris Johnson face-mask tearing up “I Welcome Refugees” placards against a backdrop of Parliament and lifejackets laid out next to a large inflatable boat similar to those used in recent Channel crossings.