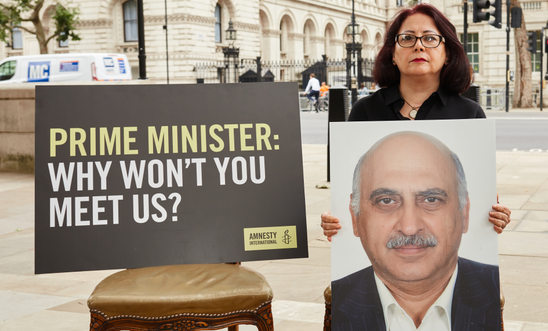 Family of British man arbitrarily jailed in Iran, including wife Sherry Izadi, sit in chairs outside Downing St, with vacant chair left for prime minister who is yet to meet the family

The family of a British man jailed in Iran staged an “empty chair” protest opposite Downing Street this morning to highlight the need for Boris Johnson to urgently meet them to discuss his plight.

Today marks the day that Anoosheh Ashoori, a 67-year-old retired engineer from south London, has spent exactly four years in jail in Iran after being arrested during a family visit to the country in 2017.

Like several other British nationals held in Iran in recent years, Ashoori was jailed on trumped-up national security-related charges after a grossly unfair trial.

Despite assurances from officials that Ashoori’s case is a “top priority” for the UK government, his family have been unable to secure a meeting with the Prime Minister despite formally requesting one more than a year ago.

With Ashoori’s health deteriorating after four years in Tehran’s notorious Evin prison, the family have again written to No10 via their MP Janet Daby, urgently seeking a meeting - a call backed by Amnesty International, which has also formally written to the Prime Minister about the case.

“The four-year anniversary of Anoosheh’s unlawful detention is not the kind of anniversary we want to celebrate.

“Instead of celebrating birthdays, wedding anniversaries and Christmases, our life has become an endless and sad cycle of missed milestones.

“It is incredible that the Prime Minister has never extended us the courtesy of sympathy or public recognition.

“Our only wish is for this terrible ordeal to end and for Anoosheh to return home to his family who miss him beyond what words can express.”

“The Government is failing Anoosheh and failing his family.

“It’s actually quite shocking that Anoosheh’s family have had to mount a protest outside Downing Street in an attempt to get the Prime Minister to meet them.

“Anoosheh’s family shouldn’t be out in the street, they should be inside No10 speaking directly to the PM and officials over how best to secure this man’s freedom.

“The Government needs to grant diplomatic protection to Anoosheh as part of sustained efforts to secure his freedom and that of other UK nationals arbitrarily jailed in Iran.”

At 11am today, Ashoori’s wife Sherry Izadi, his daughter Elika, and his son Aryan sat in chairs next to an empty chair which had a large “Prime Minister: why won’t you meet us?” sign directly across the road from Downing Street. Sherry also held a large photograph of Anoosheh.