UK: Amnesty warns Human rights 'not sweets in a sweetshop' as consultation launched 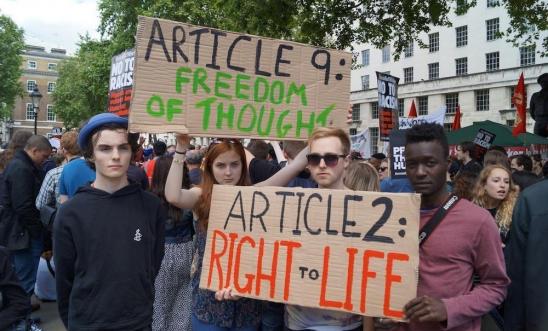 Responding to news that plans to make changes to human rights laws, including the launch of a consultation into replacing the Human Rights Act, will be announced by the Justice Secretary Dominic Raab in the Commons on Tuesday, Sacha Deshmukh Amnesty International UK’s CEO, said:

“We need to put a stop to this aggressive human rights roll-back. Human rights are not sweets in a sweet shop for Ministers to pick and choose from.

“Human rights laws and standards are hard-won, built from historic struggle and impassioned campaigning - politicians of the day must not be allowed to redefine rights based on which the Government likes and which it does not.

“Hillsborough, Mid Staffs, a proper inquiry into the Government’s handling of the Covid pandemic - when it comes to righting wrongs, the Human Rights Act is the most important tool in the box. It has been, and will continue to be, absolutely vital in the fight for justice, not least when the authorities have something to hide

“If ministers move ahead with plans to water down the Human Rights Act and override judgments with which they disagree, they risk aligning themselves with authoritarian regimes around the world.

“We are being sold a pup, being riled up to focus on a few unpopular cases when it’s clear the Government’s real motivation is to cut off at the knees any attempt to hold it to account.

“It took ordinary people a very long time to win these rights - we must not let politicians take them away with the stroke of a pen.”

In an opinion poll commissioned by Amnesty earlier this year, more than two thirds (68%) of those questioned thought it was important to have a means by which to hold the Government to account when things go wrong, while more than half (53%) said the coronavirus pandemic had shown that human rights protections were more important than ever. More than half (59%) also said they thought human rights protections should be considered permanent and politicians should not be able to reduce or remove them.

Any significant change to the Human Rights Act is also likely to add greater strain to the UK’s devolution settlement, including endangering peace in Northern Ireland.

“In Northern Ireland, the Human Rights Act has a constitutional and peace-guaranteeing function which is unique in the UK. Any changes or diminution in the operation of the Human Rights Act could constitute a breach of the Good Friday Agreement and has the potential to undermine the finely-balanced peace settlement.”