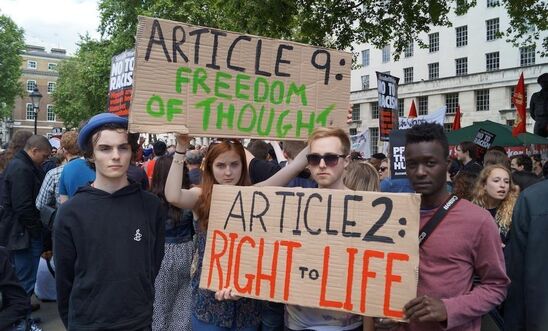 There is no appetite to amend the Human Rights Act and the coronavirus pandemic has highlighted the need for strong human rights protection more than ever, said Amnesty International today (3 March), as it published new polling ahead of the final day of submissions to the Government’s controversial review of the human rights legislation.

The polling, conducted this week by Savanta ComRes asked a representative sample of 2,247 adults from across the UK a series of questions about the Human Rights Act.

More than two thirds (68%) of those polled thought it was important to have a safety net to hold the Government to account when things go wrong, and more than half (53%) agreed that the coronavirus pandemic has made it clear we need human rights protections more than ever.

More than half of UK adults (59%) also said they thought human rights protections should be considered permanent and politicians should not be able to reduce them.

Asked what they thought should be the Government’s priorities in coming years - more than two-thirds of respondents said ensuring the NHS is properly funded (67%), more than half believed that working towards economic recovery after lockdown (54%) should be a priority, while 53% said getting children’s education back on track should be prioritised. Meanwhile, issues such as administering vaccines (50%), tackling climate change (46%) or securing post-Brexit trade deals (39%) also received notable levels of support. Reviewing the Human Rights Act was considered to be the least pressing priority from a list of 13 issues provided in the poll, with only 18% of people selecting it.

"This terrible last year has reinforced the importance of basic human rights protections in people’s minds, so it’s extremely worrying that the Government is apparently still hell-bent on tinkering with or even substantially diluting this vital piece of legislation.

“From Hillsborough to Grenfell and right through to the appalling mishandling of the Covid crisis in our care homes, we’ve never so badly needed a means to hold the Government to account.

“We are clear, and the public are clear too: The Government should not review or reduce our rights and protections.

“The Government has an extensive ‘to do’ list and stripping back this vital safety net and compromising the UK’s ability to uphold human rights around the world should not feature on it.

“It’s clear that many people think increasing tensions within the union of the UK and threatening the fragile peace in Northern Ireland are among the serious risks any tampering with the act presents. The Government needs to decide if it is happy to take those risks.”

Concerns over removal of rights

Close to half of the adults polled (45%) felt that changing human rights laws in the UK could have a negative impact on the UK's ability to promote human rights internationally.

A significant number of people (44% overall) - also thought the Government should leave the Human Rights Act alone as changing it could threaten the union of the United Kingdom (England, Northern Ireland, Scotland and Wales).

The polling also showed concern that changes to the Human Rights Act could undermine the Good Friday Agreement in Northern Ireland, with 40% of adults agreeing that the Government should leave it alone over fears that it could jeopardise the peace settlement.

More than 175,000 people have called for the Human Rights Act to be kept in an Amnesty petition.

Methodology: Savanta ComRes interviewed 2,247 UK adults online between 26th and 28th February 2021. Data were weighted to be representative of UK adults by key demographics including age, gender, region and social grade. Savanta ComRes is a member of the British Polling Council and abides by its rules. Full tables available at https://comresglobal.com/polls/amnesty-international-human-rights-poll-2021/