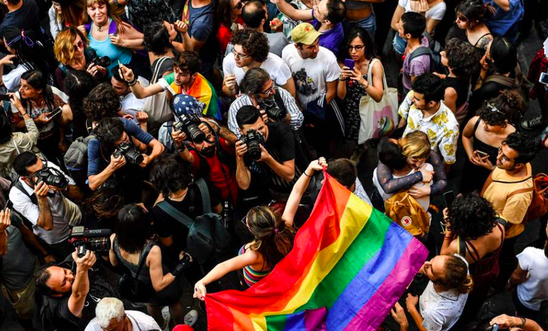 “An entirely peaceful Istanbul Pride has yet again tainted by the shocking unwarranted actions of the police who attacked groups of Pride participants.

"The wanton use of tear gas and plastic bullets in this context is completely unacceptable and further compounds the unlawful ban LGBTI people and their allies have been subjected to.

“In a blatant attack on freedom of expression, Amnesty International’s representatives monitoring the Pride event received allegations that police announced that people in ‘inappropriate’ dress would be detained.

“We are dismayed at the news that people have been arbitrarily detained by police simply because of their participation in Istanbul pride. They must be immediately and unconditionally released and an urgent investigation into the use of excessive force must be launched.”

The Istanbul Pride march was banned by the Istanbul governor’s office from taking place in central Taksim district and elsewhere in the city. Following last minute negotiations between police and Istanbul Pride organisers, the participants were allowed to gather at Mis Street near Taksim square where representatives of the Pride organising committee read out a press statement.

Police used tear gas and rubber bullets against Pride participants who had left Mis Street as they continued to celebrate in small groups in adjacent streets. The Istanbul Pride march has been banned by the authorities since 2015, on unlawful grounds.