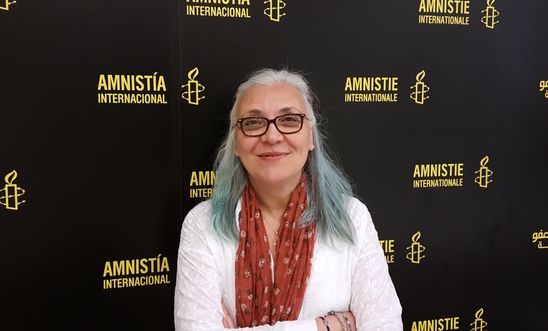 One hundred days after their wrongful arrest, Amnesty International is leading a global demand for the immediate and unconditional release of 11 prominent human rights defenders in Turkey.

Ten activists, including İdil Eser, the Director of Amnesty Turkey, were arrested on 5 July whilst Taner Kılıç, Amnesty’s Turkey Chair, was arrested the month before. On 4 October, a prosecutor filed an indictment calling for jail terms of up to 15 years for all 11 of the human rights defenders on absurd and trumped up terrorism charges.

“One hundred days ago, our colleagues were locked up for standing up for human rights. Every passing day further exposes the long reach of the post-coup crackdown and the deep flaws in Turkey’s justice system.

“The indictment is a toxic mix of innuendo and untruth which does not stand up to the slightest scrutiny. It repeats ludicrous and contradictory allegations which have no place in any self-respecting courtroom.”

In the coming days, Amnesty activists in more than 25 countries will hold more than 200 parties and stunts to mark İdil‘s 54th birthday on Saturday 14 October. These will range from a birthday party in the European Parliament, to a press conference in a makeshift prison in Madrid. Full-size paper cutouts of Idil will be present to highlight her absence.

The activists are accused of assisting a variety of ‘armed terrorist organisations’ with diametrically opposing ideologies. The charges against them include outlandish claims that standard human rights activities such as appealing to stop the sale of tear gas, making a grant application or campaigning for the release of hunger striking teachers were carried out on behalf of terrorist organisations.

After three months, the investigation has unsurprisingly failed to provide any incriminating evidence to substantiate the prosecutor’s fantastical charges. Nor has it shown how the supposedly secret meeting relates to terrorism in any way.

Some of the claims against İdil are based on Amnesty documents and public communications that predate her appointment at the organisation.

“Rounding up human rights defenders was clearly intended to send a message that dissent will not be tolerated. But the courage of İdil Eser and her colleagues and the support they have garnered around the world has sent a brighter message: that critical voices cannot be silenced.

“The Turkish authorities must immediately and unconditionally release the imprisoned defenders and end the brutal post-coup crackdown that is ravaging the country.”