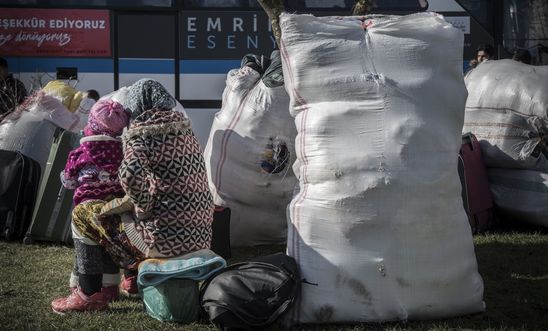 Refugees beaten into signing ‘voluntary return’ documents, with others told they were signing to receive blankets from detention centres

‘Millions more refugees from Syria are at risk’ - Anna Shea

The Turkish authorities spent the months leading up to the country’s current military offensive in northeast Syria forcibly deporting hundreds of Syrian refugees back to the war-torn country, a new Amnesty International report reveals today (25 October).

Refugees in Turkey report that Turkish police had beaten or threatened them into signing documents declaring their wish to return to Syria. In reality, Turkey was forcing them back to a war zone and putting their lives in grave danger.

There are no official statistics on such deportations but, based on dozens of interviews conducted between July and this month, Amnesty estimates that over the past few months the number is likely to be in the hundreds.

Amnesty’s 20-page report - Sent to a war zone: Turkey’s illegal deportations of Syrian refugees - shows how many people were coerced or misled when signing so-called “voluntary return” documents. Some of those Amnesty spoke to said they were beaten or threatened with violence to force them to sign. Others were told they were signing a registration document, that it was a confirmation of having received a blanket from a detention centre, or a form that expressed their desire to remain in Turkey.

Amnesty documented 20 verified cases of forced deportations, each of which involved people being sent across the border on buses filled with dozens of other people who were handcuffed with plastic ties and were also seemingly being forcibly deported.

Qasim*, a 39-year-old father from Aleppo, said he was detained in a police station in the Turkish city of Konya for six days, where officers reportedly told him: “You have a choice: one or two months, or a year, in prison - or you go to Syria.”

John, a Syrian Christian, said Turkish migration officials told him: “If you ask for a lawyer we will keep you six or seven months and we will hurt you.” He was deported after being caught by the Turkish coastguard trying to get to Greece, and said that after arriving in Syria he was detained for a week in Idlib by Jabhat al Nusra, an Islamist armed group linked to Al Qaeda. “It was a miracle I got out alive,” he said.

It is illegal to deport people to Syria as it exposes them to a real risk of serious human rights violations. The Turkish authorities claim that all those who return to Syria do so voluntarily, and that a total of 315,000 people have left for Syria on an entirely voluntary basis.

“It is chilling that Turkey’s deal with Russia this week agrees to the ‘safe and voluntary return’ of refugees to a yet to-be-established ‘safe zone.’

“Returns until now have been anything but safe and voluntary - and now millions more refugees from Syria are at risk.

“Turkey’s claim that refugees from Syria are choosing to walk straight back into the conflict is dangerous and dishonest. Our research shows that people are being tricked or forced into returning.

“Turkey deserves recognition for hosting more than 3.6 million women, men and children from Syria for more than eight years, but it cannot use this generosity as an excuse to flout international and domestic law by deporting people to an active conflict zone.

“The Turkish authorities must stop forcibly returning people to Syria and ensure that anyone who has been deported is able to re-enter Turkey safely and re-access essential services.

“The European Union and the rest of the international community, instead of devoting their energies to keeping people seeking asylum from their territories, should dramatically increase resettlement commitments for Syrian refugees from Turkey.”

*To protect the Syrians interviewed for this research, only aliases are used.