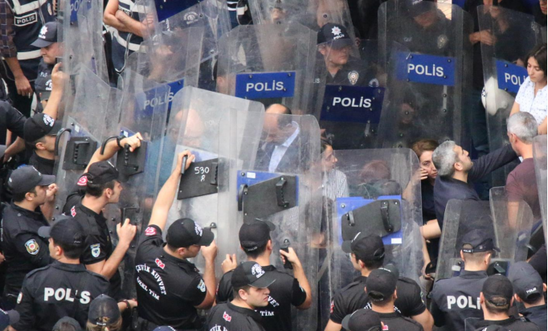 In the first week of offensive alone, 839 social media accounts were under investigation for ‘sharing criminal content’

Journalists and opposition figures targeted, with several given travel bans

Hundreds of people have been detained in Turkey for commenting or reporting on Turkey’s military offensive in northeast Syria, said Amnesty International in a new report today.

Amnesty’s report - ‘We can’t complain’: Turkey’s continuing crackdown on dissent over its military operation ‘Peace Spring’ in northeast Syria - shows how last month’s offensive was accompanied by a wave of repression in Turkey, which swept up anyone who deviated from the Government’s official line.

Journalists, social media users and protesters have been accused of “terrorism” and subjected to criminal investigation, arbitrary detention and travel bans. If prosecuted and found guilty, they could face lengthy prison sentences.

In the first week of the offensive alone, 839 social media accounts were under investigation for “sharing criminal content”, with 186 people reportedly taken into police custody and 24 remanded in pre-trial detention, according to official figures.

One social media user, who was detained and accused of spreading “propaganda for a terrorist organisation”, had retweeted three tweets, one of which read: “Rojava [the autonomous Kurdish area in northern Syria] will win. No to War”. Like others, these tweets did not come remotely close to constituting evidence of an internationally-recognisable crime. He was given an overseas travel ban and required to report to a local police station twice a month.

One lawyer told Amnesty: “Using the words ‘war’, ‘occupation’, ‘Rojava’ has become a crime. The judiciary says ‘you cannot say no to war’.”

“As the tanks rolled across the Syrian border, the Government took the opportunity to launch a domestic campaign to eradicate dissenting opinions from media, social media and the streets.

“Since the start of the military offensive, Turkey’s already entrenched atmosphere of censorship and fear has deepened, with detentions and trumped-up charges used to silence the few who dare to utter any challenge or criticism of Operation Peace Spring.

“Critical discussion on issues of Kurdish rights and politics has become even further off- limits.

“The Turkish authorities must stop gagging opinions they don’t like and end the ongoing crackdown.

“All charges and prosecutions of those targeted for peaceful expression of their opposition to Turkey’s military operations should be immediately dropped.”

On 10 October, a day after the offensive began, Turkey’s broadcasting regulatory body (RTÜK) warned media outlets that there would be zero tolerance of “any broadcasting that may negatively impact the morale and motivation of […] soldiers or may mislead citizens through incomplete, falsified or partial information that serves the aims of terror”.

On the same day, two journalists were detained. Hakan Demir of the daily newspaper Birgün was questioned over a tweet on the paper’s Twitter account based on an NBC report stating that “Turkish warplanes have started to carry out airstrikes on civilian areas.” Meanwhile Fatih Gökhan Diler, managing editor of the Diken news website, was detained after publication of an article with the headline “SDF claim: two civilians lost their lives”. Both journalists were accused of “inciting enmity and hatred”, before being released with overseas travel bans pending the outcome of criminal investigations.

On 19 October, police burst into the home of journalist and human rights defender, Nurcan Baysal. She told Amnesty:

“Having my home raided and my children terrorised by 30 heavily-armed, masked police officers simply for some social media posts calling for peace, shows the level of suppression of freedom of expression in Turkey.”

Meanwhile, the journalist Özlem Oral was detained on the same day and questioned over tweets criticising Operation Peace Spring posted on a Twitter account not belonging to her. She was released the next day with an overseas travel ban, required to regularly report at a local police station, and not to leave İstanbul where she lives.

On 27 October, lawyer and columnist Nurcan Kaya was detained at Istanbul airport for criticising the offensive by tweeting “We know from experience how everything you call a peace operation is a massacre”. She was released after questioning the same day but received an international travel ban.

It is not just Turkish journalists who have been targeted. On 25 October, President Erdoğan’s lawyers announced that they have filed a criminal complaint against the director and editor of French magazine Le Point, following the publication of an issue which used the cover headline “Ethnic cleansing: the Erdoğan method” in its coverage of the offensive. The lawyers claimed the cover is insulting to the president, a crime under Turkish law.

Crackdown on politicians and activists

Operation Peace Spring has also been used by the Turkish Government as a pretext to escalate a crackdown on opposition politicians and activists. Several MPs are currently subject to criminal investigations, including Sezgin Tanrıkulu, who is facing investigation for comments he made in the media and a tweet which read: “Government needs to know this, this is an unjustified war and a war against the Kurds”.

According to lawyers from the Bar Association in Şanlıurfa province, at least 54 people were taken into police custody in the province by counter-terrorism officers on 9 and 10 October. Among them were members of the Kurdish-rooted leftist opposition People’s Democratic Party, as well as members of trade unions. Within the first week of the military offensive, at least 27 people - many of whom were affiliated with People’s Democratic Party - were detained in Mardin province on terrorism-related charges. Detainees included the elected mayor of the town of Nusaybin, who has been replaced by the unelected district governor.

On 12 October, the Saturday Mothers - relatives of victims of enforced disappearances who have been holding weekly peaceful vigils for the past decade - were warned by police that they would break up their vigil “if they utter the word ‘war’”. The peaceful gathering was violently broken up as soon as a statement criticising the military operation in Syria was read out.