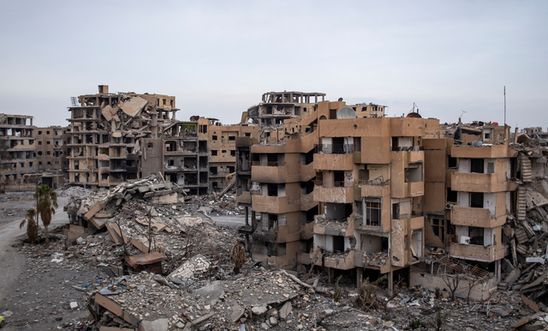 The US-led Coalition’s flurry of responses rejecting the findings of a recent Amnesty International report on the devastation wrought by their aerial bombardment of Raqqa last year shows how “deeply in denial” they are about the large number of civilians killed and injured by Coalition strikes, Amnesty said today.

Since the 5 June publication of Amnesty’s ‘War of annihilation’ report, senior Coalition and government figures have used social media, broadcast interviews and even the UK Parliament to dismiss the report’s findings that there is prima facie evidence that several Coalition attacks which killed and injured civilians violated international humanitarian law.

Earlier this month, UK Defence Secretary Gavin Williamson said in the House of Commons that Amnesty’s finding were “unfounded” and branded the report “deeply disappointing and disgraceful” while praising the “amazing professionalism of our Royal Air Force”.

The Coalition claims to be “transparent” and to have “meticulous processes” in place to ensure everything possible is done to avoid civilian casualties. But they consistently fail to demonstrate that this is in fact the case.

In stark contrast to the Coalition - which has failed to conduct field investigations into its air attacks in Raqqa - Amnesty spent several weeks in Raqqa conducting such investigations, leaving no doubt that the Coalition killed hundreds and injured thousands of civilians during its offensive. In just four cases analysed in detail by Amnesty, coalition airstrikes killed dozens of civilians, mostly women and children - including 39 members of a single family.

Meanwhile, the Coalition’s monthly reports on civilian casualties across Iraq and Syria rely on vague descriptions and dismiss the vast majority of allegations as “non-credible”. The Coalition has acknowledged a mere 23 civilian deaths resulting from the 30,000-plus artillery rounds and several thousand airstrikes it launched into Raqqa city during its four-month military campaign last year. Amnesty strongly believes this figure is neither accurate nor credible.

The artificially low number of civilian casualties the Coalition acknowledges stems in part from poor investigation procedures that fail to involve on-the-ground research.

The only Coalition partner on the ground in Raqqa in the aftermath of the military offensive - the Kurdish-led Syrian Defence Forces - has demonstrated a very different understanding of events during the offensive. In a letter to Amnesty at the end of last month, the SDF pointed to Coalition “mistakes” and “unsuccessful air strikes” resulting in “huge human and material losses” on the ground.

“The Coalition’s knee-jerk reactions are long on rhetoric and short on detail. They lay bare how deeply in denial the Coalition leadership is about its failure to protect civilians caught in conflict.

“The blustery denials we’ve repeatedly seen and heard from senior Coalition officials are contradicted by the lived reality of the hundreds of civilians we’ve interviewed for our investigations in Raqqa and Mosul. They’re even contradicted by their own partners on the ground.

“We are asking the Coalition to live up to their own standards when it comes to reporting on civilian casualties in conflict, to investigate allegations of violations and offer redress to victims and their families.

“Unless the Coalition learns from its mistakes in Raqqa - and Mosul beforehand - it will be doomed to repeat them, with civilians again paying a devastating price.”

“Visiting strike sites and interviewing survivors and witnesses are crucial elements of any investigation. Without them, the Coalition’s investigations are simply not credible by any stretch of the imagination.

“Both strike sites and survivors and witnesses are easily accessible, as Raqqa and Mosul are now under the control of Coalition partners. Coalition officials and Western politicians have recently travelled there, so there is no reason for the Coalition not to carry out investigations that are worthy of the term, as promised in its own methodology.”

Since early 2017, Amnesty has engaged in numerous advocacy meetings with Coalition officials, written repeatedly to defence officials in the USA, UK and France, and published four reports on the civilian casualties caused by the Coalition’s operations in Mosul and Raqqa. However, in this period the Coalition has either failed to respond to requests for further information, or has attempted to dismiss Amnesty’s findings.

The Coalition and some of its members have occasionally admitted to causing civilian casualties after Amnesty and other human rights organisations publicised particular cases. At the end of June, the Coalition announced that, in light of new evidence from Amnesty, it would re-evaluate four previously closed cases and examine one new case.