Syria: Tens of thousands of disappeared must not be forgotten 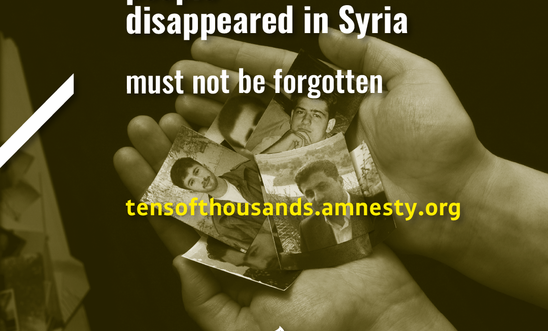 Some 75,000 people subjected to enforced disappearance by the Syrian government since 2011

Amnesty launch online platform for families of those abducted

The Syrian government and armed groups involved in the country’s conflict must disclose the fate and whereabouts of tens of thousands of people who have been forcibly disappeared or abducted since the onset of the crisis, said Amnesty International on the International Day of the Disappeared (Wednesday 30 August).

“Amid the brutality and bloodshed of the Syrian conflict, the plight of those who have vanished after being arrested by the authorities or detained by armed groups is a tragedy that has been largely ignored internationally. Tens of thousands of families have been desperately trying to uncover the fate of their missing relatives.

“Russia and the United States, in particular, must use their influence to pressure respectively the Syrian government and armed opposition groups to grant independent monitors access to places of detention, disclose the names and whereabouts of those deprived of their liberty, and allow all detainees to communicate with their families.”

According to the Syrian Network for Human Rights (SNHR), 75,000 people have been subjected to enforced disappearance by the Syrian government since 2011.

Amnesty International has launched an online campaigning platform to shine a light on those who have faced enforced disappearance and abduction in Syria and help families in their efforts to find their loved ones: https://tensofthousands.amnesty.org/

Fadwa Mahmoud’s husband, Abdulaziz Al-Kheir, and son, Maher Tahan, disappeared after being arrested by Air Force Intelligence at a checkpoint in Damascus, although the Syrian government denies this.

Fadwa has described the agony of not knowing the fate or whereabouts of either her husband or son since 20 September 2012.

She said: “The days pass by extremely heavily. I live on hope, which allows me to go on and pushes me to work hard for their release. I never lose hope that they will return. I always imagine that moment when I learn of their release.”

While the overwhelming majority of those who have disappeared in Syria have vanished in a network of government detention centres, more than 2,000 individuals have gone missing after being detained by armed opposition groups and the armed group that calls itself the Islamic State.

Razan Zeitouneh, Wael Hamada, Samira Khalil and Nazem Hammadi, peaceful Syrian activists who worked at the Violations Documentation Center in Syria (VDC), an NGO that monitors human rights violations, were abducted by an armed opposition group from their office in Eastern Ghouta on 9 December 2013. Their families have been denied any shred of information about the fate of their loved ones.

“There has been total impunity for those responsible for disappearances in Syria. This issue must be addressed by the international community at every opportunity, including peace talks in Geneva and Astana, or else its consequences will be felt for generations and the prospects for healing and reconciliation will be undermined.”

To mark the International Day of the Disappeared, Amnesty International UK is organising screenings of ‘Syria Disappeared – The Case against Assad’ across the UK including a special event in London with leading Syrian human rights lawyer, Mazen Darwish.

Amnesty International has also launched an art exhibition in Beirut entitled “Tens of Thousands”, opening on 30 August, which aims to raise awareness of Syria’s disappeared and missing and give a voice to their families.

The exhibition at the Station Beirut gallery features items left behind by individuals who have been forcibly disappeared or abducted, as well as poems written by formerly detained poets describing their experiences in Syrian detention facilities. There is also a collection of portraits of women detainees by Syrian artist Azza Abou Rebieh. The exhibition will run from 30 August 2017 to 6 September 2017.

Amnesty International has been monitoring and campaigning against enforced disappearances and abductions, as well as other serious violations and abuses of human rights committed in Syria, since the start of the crisis in 2011.

Amnesty’s 2015 report ‘Between prison and the grave’: Enforced disappearances in Syria details how the Syrian authorities have arrested and forcibly disappeared large numbers of peaceful government opponents and individuals they considered to be “disloyal”. Amnesty International has also documented the abductions, torture and summary killings carried out by armed opposition groups against civilians, captured members of government armed forces and security forces, and of pro-government shabiha militias.