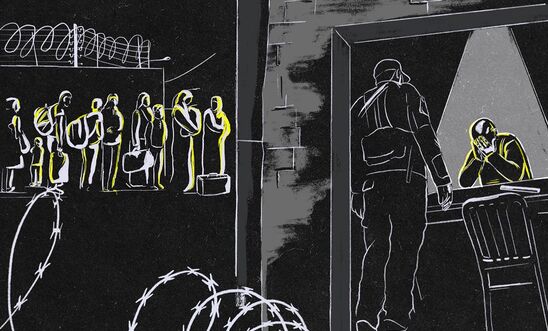 Another woman who was raped was told, ‘This is to welcome you to your country’

‘They electrocuted me between the eyes. I felt my whole brain was shaking’ - Ismael

The security forces in Syria have subjected Syrian refugees who returned to the country to detention, disappearance and horrific torture - including sexual violence - Amnesty International said today in a shocking new report.

The report - coming against a backdrop of the Damascus authorities publicly encouraging returns and refugee-hosting countries increasingly pressuring people to go back - shows how the Syrian authorities have explicitly targeted returning refugees because of their original decision to flee Syria, accusing them of disloyalty or “terrorism.”

Amnesty’s report documents 59 cases of men, women and children who were arbitrarily detained after returning to Syria, most frequently following broad accusations of “terrorism”. In 33 of the cases, returnees were subjected to torture or other ill-treatment during detention or interrogation. Intelligence officers used torture to force detainees to confess to alleged crimes or to punish them for alleged opposition to the government. In some cases, returnees were targeted simply because they came from parts of Syria which had been under opposition control.

The report includes shocking details of 14 cases of sexual violence committed by the Syrian security forces - including seven cases of rape - against five women, a teenage boy and a five-year-old girl. Testimonies are consistent with well-documented patterns of sexual violence and rape committed against civilians and detainees during the Syria conflict by pro-government forces.

When Noor* returned from Lebanon in the summer of 2019 she was stopped at the border by a security officer who said:

The officer subsequently raped Noor and her five-year-old daughter in a small room used for interrogations at the border crossing. He also took photographs of them naked.

Yasmin* returned from Lebanon with her teenage son and three-year-old daughter. The security forces arrested them at a border crossing, accused Yasmin of spying for a foreign country and detained Yasmin and her children for 29 hours. Intelligence officers then raped Yasmin in front of her children and took her son to another room where they also raped him with a shisha pipe. Yasmin told Amnesty how the officer who raped her said:

“This is to welcome you to your country. If you get out of Syria again and come back again, we will welcome you in a bigger way. We are trying to humiliate you and your son. You will not forget [this] humiliation in all your life.”

In another case, Karim* was arrested four days after he returned from Lebanon to his village in Homs province. During six-and-a-half months of detention, security officials accused him of being “a terrorist” because he was from a well-known pro-opposition village.

Karim told Amnesty of the after-effects of his torture during captivity:

“After I was released, I couldn’t see anyone who visited me for five months. I was too scared to speak to anyone. I had nightmares, hallucinations. I was talking during my sleep. I used to wake up crying and scared. I’m disabled because the nerves of my right hand are damaged due to [torture]. Some of the discs of my back are also damaged.”

In another case, Yasin* was arrested at a checkpoint after he crossed the Lebanon-Syria border and spent four months in prison. He said:

“I don’t know how much time I spent being tortured in this room … Sometimes, when [an agent] hit me, I counted every hit. Sometimes it reached 50 or 60 and I passed out. Once it reached 100.”

Ismael*, who was detained in four different intelligence branches over three-and-a-half months, said:

“They electrocuted me between the eyes. I felt my whole brain was shaking … I wished I would die. I didn’t know if it was the morning or the night. I wasn’t able to stand on my feet anymore, even to go to interrogation. They had to hold me to take me there and bring me back.”

“The Assad government has attempted to depict Syria as a country in recovery. The reality is that the Syrian authorities are still perpetrating the widespread and systematic human rights violations that contributed to millions of people seeking safety abroad.

“Any government claiming Syria is now safe is wilfully ignoring the horrific reality on the ground, leaving refugees once again fearing for their lives.

“We are urging European governments to grant refugee status to people from Syria, and immediately halt any practice directly or indirectly forcing people to return to Syria.”

Amnesty’s report recorded 27 cases of enforced disappearance. In five cases, the authorities eventually informed the families that their disappeared relative had died in custody; five were eventually released; the fate of the other 17 people remains unknown.

Ola*, who returned from Lebanon with her brother in 2019, said security forces arrested her brother at the border crossing. In the following weeks, they also visited Ola at her home and interrogated her about her reasons for leaving and returning to Syria. “They see us as terrorists because we left to Lebanon”, she said. Five months later the authorities informed Ola’s family that her brother had died in detention.

Ibrahim* told Amnesty that his cousin - alongside his wife and their three young children, aged two-, four- and eight-years-old - were arrested after returning from France in early 2019. At the time of writing the family has been subjected to enforced disappearance for two years and eight months.

Amnesty has also documented 27 cases where returnees were detained as a means of extortion, with families paying as much as £20,000 for the release of their relatives.

*All names have been changed

Some refugee families have arranged for women to return to Syria ahead of their husbands assuming they would be less likely to be arrested - partly because women are not subject to compulsory military service in Syria. However, Amnesty has documented the arbitrary or unlawful detention of 13 women, some of whom were interrogated about their male relatives, and of ten children - aged between three-weeks-old and 16-years-old - who were arrested along with their mothers. Security forces subjected five children to torture and other-ill treatment. In Amnesty’s assessment women are as much at risk as men when they return to Syria and should therefore be granted the same level of protection overseas.

Denmark and Sweden have recently reassessed the residency permits of asylum-seekers who come from regions in Syria they consider safe for return, including Damascus and the surrounding countryside. However, a third of the cases documented in Amnesty’s report involve human rights violations in Damascus and the Damascus area. Amnesty believes that no part of Syria is safe for returnees. Anyone who has left Syria since the beginning of the conflict is at real risk of suffering persecution upon return given perceptions about their political opinions or simply as punishment for having fled the country.

The immigration authorities in the UK are not presently known to be considering forced returns of Syrians. Instead, the Home Office is currently attempting to strike deals with other European countries in much-criticised efforts to remove asylum applicants from the UK. Thus far, the UK has reportedly been unable to secure any such deals. According to official data, there were 1,583 Syrian asylum claims outstanding in the UK at the end of June 2021, a very large increase on the figures from two years earlier (there were fewer than 350 cases in the system at the end of June 2019).

“While the UK is rightly not returning refugees to Syria, its position remains profoundly inadequate. Ministers have allowed a backlog of long-outstanding asylum claims by Syrians to more than quadruple in only two years, with more than 1,500 people now stuck in limbo.

“The Government continues its posturing over removing people, including Syrians, to other European countries rather than taking responsibility for them itself.

“For years, it’s been patently obvious that Syria is little more than a death-trap for returning refugees and no country should be forcing Syrians to go back. It’s long overdue that the UK granted full refugee protection to all those in Britain who’ve fled Assad’s murderous regime.”

Range of the research

Amnesty’s report documents serious human rights violations committed against refugees who returned from Lebanon, Turkey, Jordan, the UAE, France, Germany and Rukban (an informal settlement on the Jordanian-Syrian border) between mid-2017 and spring 2021, based on interviews with 41 Syrians, including returnees and their relatives and friends, as well as lawyers, humanitarian workers and Syria experts.

Downloads
You’re Going To Your Death