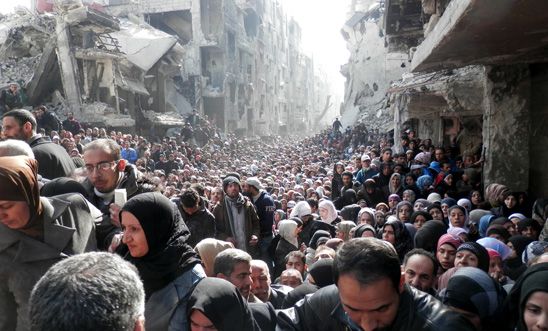 A new report by Amnesty International published today (10 March) reveals that war crimes and crimes against humanity have been carried out on Palestinian and Syrian civilians in Yarmouk, the large Damascus district which is under siege from Syrian government forces.

The 40-page report - Squeezing the life out of Yarmouk: War crimes against besieged civilians, published ahead of the third anniversary of the Syria uprising (15 March) - highlights the deaths of nearly 200 people in Yarmouk between last July and 22 February this year. According to Amnesty’s research, 128 people of these starved to death in what has turned into a catastrophic humanitarian crisis for the estimated 17,000-20,000 people still trapped in Yarmouk. Last July, an existing government forces siege of Yarmouk was tightened still further, and access to food and medical supplies was completely cut off.

The report also highlights how government forces and their allies have repeatedly carried out deadly attacks - including air raids and shelling with heavy weapons - on Yarmouk’s civilian buildings, with schools, hospitals and a mosque attacked. Some of the targeted areas were sheltering people who had already been forced to flee from conflict in other parts of Syria. Meanwhile, at least 150 people have been arrested from Yarmouk since April 2011, with more than 80 still in detention as of last week. Amnesty is calling for the immediate and unconditional release of all those detained solely for their political opinions or identity.

The report shows how “rampant malnutrition” (at least 60% of people in Yarmouk are said to be suffering from malnutrition) has led to scores of deaths from starvation, as well as widespread illness. Residents told Amnesty that they have not eaten fruit or vegetables for months, and local prices have increased enormously, with a kilo of rice costing up to £60. For months residents have been forced to forage for food in the streets or fields - risking being killed by Syrian army snipers as they scour for anything that might be edible, including cactus and dandelion leaves. Despite the UN’s intermittent delivery of limited food supplies earlier this year, outside aid has been woefully inadequate, with aid workers calling deliveries “a drop in the ocean”. Renewed shelling of the area in recent days has cut off deliveries once more.

Yarmouk has had its electricity power supply cut since last April, and hospitals have run out of even the most basic medical supplies - most have closed down completely. Residents told Amnesty that in some cases armed opposition groups had looted medical supplies and stolen ambulances from the hospitals. Medical workers have also been repeatedly harassed: at least 12 have been arrested during the siege, often at checkpoints, and six have disappeared after being seized by Syrian government forces. At least one doctor is believed to have died as a result of being tortured in custody. Meanwhile, reports have emerged of women dying in childbirth, and 18 children including babies have died. Complications have also arisen from desperate residents eating inedible or poisonous plants and cats and dogs.

“Syrian forces are committing war crimes by using starvation of civilians as a weapon of war.

“The harrowing accounts of families having to resort to eating cats and dogs, and civilians attacked by snipers as they forage for food, have become all too familiar details of the horror story that has materialised in Yarmouk.

“Life in Yarmouk has grown increasingly unbearable for desperate civilians who find themselves starving and trapped in a downward cycle of suffering with no means of escape.

“Deaths are mounting in Yarmouk and the situation is dire. It is extremely distressing to think that in many cases, lives could have been saved had proper medical care been available.

“Targeting doctors or medical workers who are trying to assist the sick and wounded is a war crime. All sides must refrain from attacks on medical and other humanitarian workers.

“The siege of Yarmouk amounts to collective punishment of the civilian population. The Syrian government must end its siege immediately and allow humanitarian agencies unfettered access to assist suffering civilians.”

The siege of Yarmouk is the deadliest of a series of armed blockades of civilian areas imposed by Syrian armed forces or armed opposition groups on a quarter of a million people across Syria. Areas under siege by Syrian government forces include suburbs and other districts of Damascus, as well as areas within or close to other major cities like Homs and Aleppo. Fighters opposed to the government have besieged Aleppo’s central prison as well as the nearby villages of Zahraa and Nobl, whose inhabitants they perceive as supporting the government. Last month a UN Security Council resolution was agreed calling for all parties to Syria’s conflict to immediately lift sieges, to allow unhindered access for humanitarian agencies and to end violations of human rights and international humanitarian law - yet this has so far failed to lead to an improvement in the situation of besieged civilians.

Amnesty is calling for anyone suspected of committing or ordering war crimes, or crimes against humanity, to be brought to justice, including through a referral to the Prosecutor of the International Criminal Court. According to the ICC’s Rome Statute, certain acts, including murder, torture and enforced disappearances, amount to crimes against humanity if directed against a civilian population as part of a widespread or systematic attack.

Downloads
Squeezing the life out of Yarmouk: war crimes against besieged civilians