Syria: at least 15 hospitals targeted in Idlib and Hama since beginning of May 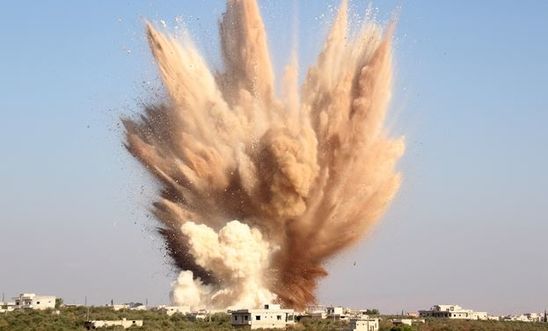 For years the Syrian and Russian governments have been bombing Idlib, with medical facilities regularly targeted © OMAR HAJ KADOUR/AFP/Getty Images

Attacks in region have led to the displacement of at least 180,000 people

The Syrian government, aided and abetted by Russia, is carrying out a deliberate and systematic assault on hospitals and other medical facilities in Idlib and Hama, Amnesty International said today, as it shared harrowing new testimony from medical workers in the region.

With the UN Security Council discuss the crisis situation in northwest Syria today, Amnesty called for Russia to be pressured over its part in the deliberate targeting of 15 hospitals in Idlib and Hama over the last three weeks.

Staff from four hospitals in Idlib and Hama told Amnesty they were targeted despite sharing their coordinates with the Syrian and Russian governments. According to the UN and Syrian medical organisations, at least 15 hospitals have reportedly been damaged or destroyed in Idlib and Hama since the beginning of May. Recent attacks in the region have led to the displacement of 180,000 people, exacerbating an already dire situation where some 1.5 million people need urgent humanitarian assistance.

Amnesty interviewed 13 people about recent attacks on four hospitals and verified videos that corroborate the testimonies.

Eyewitnesses said that between 5 and 11 May, the Syrian government carried out multiple airstrikes on the Pulse of Life hospital in Hass, the Cave Hospital in Kaferzita, and the Surgical Hospital and Al-Sham Hospital in Kafranbel (see further details of the attacks below). All these facilities, which together serve at least 300,000 in southern Idlib and northern and western Hama countryside, are now out of service.

Attacks on hospitals and medical facilities in opposition-controlled areas have become a familiar feature of the Syrian war. Hospitals in Aleppo, Daraa and the Damascus countryside were also targeted during Syrian government operations to reclaim these areas. In numerous cases, hospitals and humanitarian organisations said they had shared their coordinates with the Syrian government to try to prevent attacks - all to no avail.

“Bombing hospitals carrying out their medical functions is a war crime. These latest attacks have eliminated vital lifelines for civilians in desperate need of medical care.

“This is part of a well-established pattern targeting medical facilities to systematically attack the civilian population and it constitutes crimes against humanity.

“We are urging Security Council members meeting today to do everything in their power to end the onslaught against civilians in Idlib and hold the perpetrators of these appalling crimes to account.”

On 5 May, at around 5pm, Syrian government warplanes carried out multiple air raids on the hospital, destroying the first floor where a pharmacy, offices, and storage and electricity room are located. The attack killed one patient and injured his brother. A nurse who was inside the hospital during the attack described how multiple airstrikes led to chaos:

“We transferred the injured to the basement. A second air raid happened as we were trying to stop the bleeding, cutting the electricity ... Then a third and fourth air raid happened … We only heard sounds of explosion and basement shaking … We turned on the oxygen because there was no more air.”

Videos reviewed by Amnesty show damage to the hospital consistent with airstrikes.

Two staff at this hospital in Hass told Amnesty that the facility had been evacuated as a precaution after an intensification of attacks at the end of April. Two days after the evacuation, on 5 May, the Syrian government carried out multiple raids, destroying the hospital. There were no injuries because the hospital had already been emptied. The director of the hospital’s surgical department told Amnesty how last year the hospital had been relocated to a remote area on the outskirts of Hass village - the 5 May attack was the third since the hospital’s relocation. The surgical director said:

“Three days ago, Kafranbel town was shelled with rockets. Some of the injured were transferred to the homes of doctors and nurses so that we can at least provide them with emergency relief, so they can survive the transfer to another hospital.”

Amnesty verified a video showing an airstrike hitting a structure at a location which is consistent with that of the hospital.

Two medical workers at this hospital in Kafranbel told Amnesty that the Syrian government had carried out at least four bombing raids on 5 May, causing severe damage and putting it out of service. A nurse who was present at the time of the attack with other medical workers and an injured patient, described four successive strikes which began around 11am. The nurse said:

“We were very afraid the Syrian army would invade the town and enter the hospital … We relied on God and exited the hospital. After we evacuated, the fourth strike happened.”

A member of staff and a medical worker at this hospital in Kafranbel told Amnesty about how two air raids on 11 May had put the facility out of service. The hospital director described how it had been targeted and repaired multiple times since 2018, saying they would wait for the strikes to stop before yet again beginning repair work.