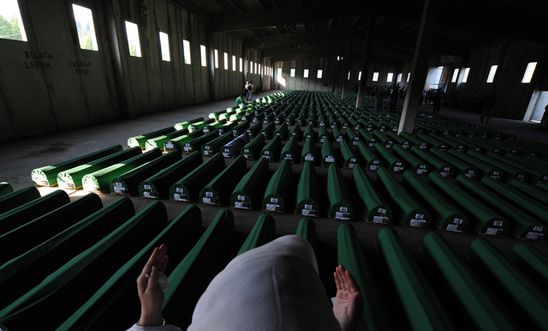 ‘Twenty years on, leaders in Bosnia and Herzegovina are refusing to admit where the bodies are buried’ - John Dalhuisen

Thousands of families of the victims of the Srebrenica genocide continue to be denied justice, truth and reparation, said Amnesty International today , as the world marks the 20th anniversary of the massacre that left more than 8,000 people dead.

More than 8,000 people from across Bosnia and Herzegovina have been “missing” since the war ended in 1995, yet the national missing persons institute has seen its funding cut further with each passing year. The Law on Missing Persons has never been fully implemented, leaving families of the missing with no access to reparation. A fund to support families of the missing persons is yet to be established, despite the law being enacted in 2004.

Meanwhile, official policies and laws in Bosnia and Herzegovina do not acknowledge the genocide and even school curricula contain no reference to the crimes in Srebrenica. The reconciliation process has not progressed and internal ethnic divisions persist.

The bodies of almost 7,000 victims of the Srebrenica genocide have been exhumed, identified and buried, including 421 child victims, one of them a new-born baby, and a 94-year-old woman. Yet, 20 years after Bosnian Serb forces advanced into the Srebrenica enclave, a designated UN “safe area”, and summarily executed thousands of Bosnian-Muslim (Bosniak) men and boys (an official estimate is that 8,372 were killed), the fate and whereabouts of more than 1,000 people still remains unclear.

“Two decades after the world averted its gaze from the worst crime to be committed on European soil since 1945, the families of the victims of the Srebrenica genocide are still awaiting justice.

“Srebrenica not only stands as stark reminder of humanity’s capacity for depravity but also of the failure of the international community to prevent genocide from happening in plain view.

“Twenty years on, leaders in Bosnia and Herzegovina are refusing to admit where the bodies are buried, literally and metaphorically.

“The longer the guilty enjoy impunity and the dead remain in mass graves, the longer this painful wound will fester fuelling dangerous and persistent ethnic divisions.”

Despite the high-level prosecutions of the principal architects of the Srebrenica genocide - Radovan Karadžiæ, Ratko Mladiæ and Slobodan Miloševiæ - at the International Criminal Tribunal for the former Yugoslavia, and the convictions of 74 others by the Tribunal, there is still a huge backlog of unresolved cases. Prosecution of crimes under international law in domestic courts is very slow. The vast majority of those suspected of war crimes and crimes against humanity enjoy impunity, safe in the knowledge that, without political will, they will never be held to account. Whilst Bosnia and Herzegovina has taken positive steps towards increasing the resources available for the prosecution of war crimes, funding is still insufficient and the government has been slow in implementing the national war crimes strategy. New investigations and prosecutions need to be launched and witness protection guaranteed in order to ensure witnesses are able to testify without fear.

A European Parliament resolution officially made the 11th of July a Day of Commemoration of the genocide throughout the EU. Earlier this week, however, Russia vetoed a UN Security Council resolution on Srebrenica. The resolution would have recognised Srebrenica as a genocide and acknowledged the urgent need to provide justice to the victims and long-term support to survivors, including survivors of sexual violence.

Amnesty is calling for Bosnia and Herzegovina to adopt the Transitional Justice Strategy - a comprehensive non-judicial framework that addresses the neglected or under-represented issues relating to the war crimes and serious human rights violations of the war. It should also adopt the national law criminalising genocide and war crime denial and implement the War Crimes Strategy and national and international obligations instructing the pursuit of accountability, justice and reparations.