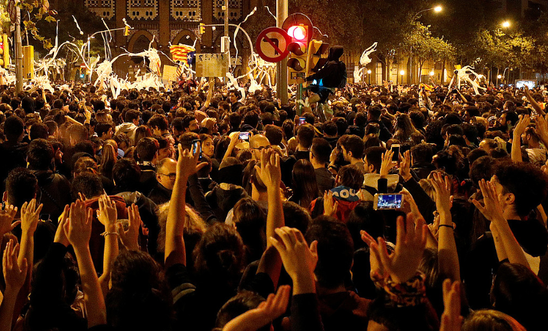 In response to the demonstrations in Barcelona and the rest of Catalonia after the Spanish Supreme Court sentenced 12 Catalan political leaders and activists, Amnesty International has called on the authorities to take every necessary measure to support peaceful assembly and allow people to freely and safely express their beliefs.

An Amnesty team has been on the ground monitoring the situation since the demonstrations began on 14 October and has documented numerous cases of excessive use of force.

Amnesty has observed instances where police used batons and other defensive equipment inappropriately and unjustifiably against people who posed no risk, including journalists and people who had already been subdued by security forces - who even so were beaten in the head and upper body.

Amnesty has also documented cases of rubber or “foam” bullets being fired at short range to disperse crowds. These have been used in partially-enclosed spaces like carparks and the area around Barcelona airport. As a consequence, two people were seriously injured on 14 October at the El Prat Airport. According to information provided by the hospital that treated them, a 22-year-old man lost his eye after being shot by a rubber or “foam” bullet-like object. The other was shot in the testicles by the same type of projectile and required surgery.

According to international standards on the use of force, rubber or “foam” bullets must never be used against peaceful protesters or in situations in which bystanders may be injured. Due to the high risk of serious injuries, these projectiles must not be used to disperse crowds. Instead, they must be used only to stop individuals engaged in violence when fire can be directed exclusively against those specific individuals. The use of these projectiles against crowds, their indiscriminate use, and their indirect use through ricochets is prohibited.

Amnesty has also confirmed the use of a police practice colloquially known as the “carousel,” which entails advancing police vans toward a crowd to disperse it. Amnesty considers this an extremely dangerous technique that can harm bystanders and those who are peacefully demonstrating.

According to information provided by the Generalitat Department of Health, 394 people have been treated by the emergency services, including 139 members of the security forces.

“The protests have been exceptionally peaceful, and though there have been certain acts of violence that have put some people at risk, the security forces must act with moderation.

“We are conscious of the challenges faced by the security forces, but excessive use of force and the inappropriate use of anti-riot weaponry by the police is never justified.”

“It is very concerning the way anti-riot munitions are being used during these demonstrations.

“In these situations, with so many people demonstrating in the street, the priority of the authorities must be to reduce tensions and allow any person who wishes to peacefully express his or her beliefs to do so safely.”