South Africa: anti-foreigner attacks have been stoked by years of rhetoric and inaction 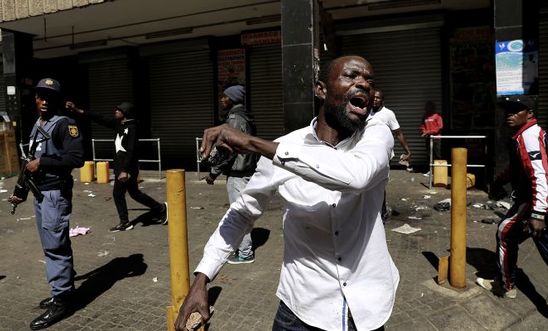 Attacks on refugees, migrants and asylum-seekers have occurred for past 11 years

Ongoing attacks in South Africa against refugees and migrants are a direct consequence of years of impunity which has left foreign nationals in the country exposed and unprotected, Amnesty International said today.

For several weeks, there has been systematic looting and burning of foreign-owned businesses in the country - largely in the capital Pretoria and the biggest city Johannesburg.

Since 2008, there have been numerous outbreaks of violence against refugees, migrants and asylum-seekers in South Africa. In some cases, xenophobia has been fuelled by rhetoric from the authorities.

For example, last November, the former health minister, Aaron Motsoaledi, accused “foreign” nationals of burdening the country’s health system. Meanwhile, in 2016, the mayor of Johannesburg, Herman Mashaba, said foreign nationals in Johannesburg were “criminals” who had hijacked the city.

“The South African authorities must stop fuelling xenophobia in their desperate attempt to win political support.

“The South African authorities must come up with a security plan to ensure the safety of all refugees and migrants, and seek to end these attacks once and for all.

“That begins with holding suspected perpetrators of past xenophobic crimes to account and breaking this cycle of impunity.”