Somalia: US must not abandon civilian victims of its air strikes after troop withdrawal 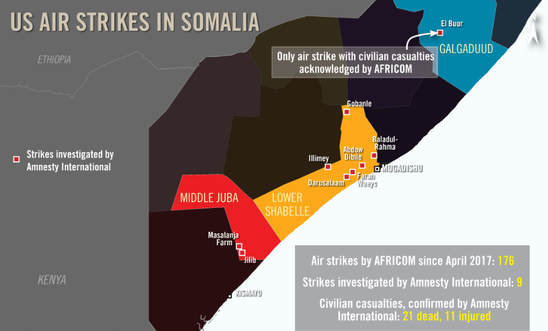 Map showing confirmed cases of US airstrikes that have killed and injured civilians in Somalia from April 2017 to March 2020 © Amnesty International/Basemap sources: HOTOSM, UNDP

US has carried out dozens of air strikes each year, killing and wounding civilians

The US military must not wash its hands of its international legal obligations towards civilian victims of US air strikes in Somalia, Amnesty International said, following a Pentagon announcement that troops will be removed by January 2021.

Following weeks of speculation about the change in policy, the US Department of Defence issued a press release on 4 December saying US Africa Command (AFRICOM) would: “reposition the majority of personnel and assets out of Somalia by early 2021”.

Withdrawal of ground troops does not necessarily mean an end to US military action in Somalia, which has included dozens of air strikes each year, many originating from bases outside of Somalia. Amnesty research has shown how these strikes have repeatedly resulted in civilian deaths and injuries.

“Whether or not US ground troops leave Somalia, AFRICOM must immediately implement a strategy to ensure that it does not abandon any progress made towards accountability for US military actions – including their reporting on civilian casualty allegations.

“Regardless of having boots on the ground or not, AFRICOM still must ensure justice and reparation for the civilian victims of violations of international humanitarian law and their families. And if air strikes continue, AFRICOM must ensure they take all feasible precautions to spare civilians.”

Ramping up the US air war

Since President Trump came to power in 2017, AFRICOM has ramped up its air war in Somalia, carrying out a total of 196 air strikes, using both drones and manned aircraft. According to the NGO Airwars, this included 38 strikes in 2017; 48 strikes in 2018; 61 strikes in 2019; and 49 strikes so far this year.

Amnesty has investigated nine US strikes in Lower Shabelle, Galgudud and Middle Juba regions since 2017 and found 21 civilians were killed and 11 injured, many as a result of apparent violations of international humanitarian law.

Besides civilian casualties from these strikes, the wider conflict – in which the armed group Al-Shabaab poses an ever-present threat to civilians – has killed thousands of civilians and displaced hundreds of thousands. According to the United Nations, at least 295,000 people have left Lower Shabelle so far this year, many of them fleeing conflict and insecurity.

Most end up in internally displaced persons camps in or near Mogadishu, where they risk exploitation and abuse, including sexual violence. Women and children are particularly vulnerable to abuse, marginalisation, and exclusion.

Since April 2019, AFRICOM has admitted to killing five Somali civilians and injuring eight others in four separate air strikes. None of the families or victims have been compensated by the US or Somalia governments.

In April this year, AFRICOM published its first quarterly assessment of civilian casualty reports – the first glimmer of transparency in more than a decade of its military operations in Somalia.