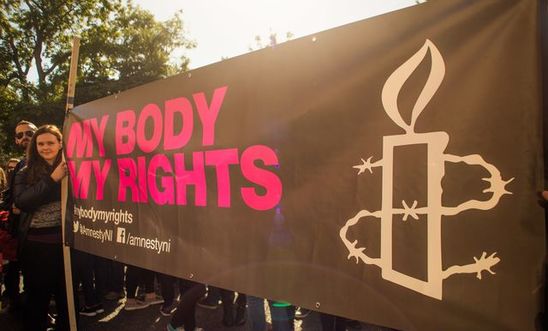 My Body My Rights campaign

The lives of millions of women and girls across Latin America are at the mercy of health care systems that prioritise religious doctrine and stereotypes over the lives of patients, Amnesty International said in a new report published today (7 March).

The study explores access to sexual and reproductive health care for women in eight countries. It reveals that access to basic rights such as contraception, safe abortions or sterilisations often depends on the wealth of the patient and the personal and religious views of the health professionals or public officials.

“Tragically, for women across Latin America, receiving life-saving medical treatment depends on the good will of a health professional or the depth of her pockets. This outrageous and utterly illegal lottery-style approach to health care is putting thousands of lives at risk.

“From El Salvador, where abortions are banned even when the life of a patient depends on it, to Mexico where women living with HIV face forced sterilisations, women and girls across the region are being abused by the very professionals and systems that are supposed to protect them.

“The common pattern is that women and girls are not trusted to make their own choices when it comes to their sexuality, there is always somebody else making those decisions for them.

“These absurd regulations and practices show that violence, which sometimes amounts to torture, and discrimination against women is not only tolerated but promoted by the State.”

Abortion is banned without exception in seven countries in the Americas – Chile, the Dominican Republic, El Salvador, Haiti, Honduras, Nicaragua and Suriname – even when the health or life of a woman or girl depend on it.

In most other countries, even when legal, accessing life-saving abortions is incredibly difficult as some health professionals will refuse to practise them on ideological grounds.

In Uruguay, for example, a country that made abortion legal in 2012, many health professionals declared themselves “conscientious objectors” and refuse to facilitate terminations.

This leaves many women with little choice but to seek “back street” unsafe abortions – which were the cause of at least one in ten maternal deaths across the region in 2014.

Rosaura Arisleida Almonte Hernández, a 16-year-old girl from the Dominican Republic, died of leukaemia in August 2012 after doctors delayed her treatment because she was pregnant, failing to provide her with the best treatment possible for her condition.

Several requests from Rosaura to have an abortion, which would have allowed her to get the urgent treatment she needed were denied as the procedure is banned in all circumstances. The cancer treatment eventually begun a few days after Rosaura had a miscarriage but by then it was too late to save her life.

Even in countries where abortions are legal in certain circumstances, public health doctors refuse to terminate pregnancies due to their personal beliefs. The only recourse left for many women is to pay for a private abortion which is not possible for women with few economic resources.

In Paraguay, in 2015, the authorities repeatedly denied requests from a 10-year-old who became pregnant after being raped to terminate her pregnancy. Unable to access an abortion, the child was forced to give birth.

Amnesty has also documented stories of women who have been forced to undergo medical procedures against their wishes, mocked and discriminated against for living with HIV when they arrived in hospitals to give birth.

Michelle, a 23-year-old mother of two from Veracruz, a state west of Mexico City, learned she was HIV positive during a medical check-up when she was four months pregnant.

The day she arrived in the hospital to give birth she found a large banner on her bed that read “HIV”.

Later, her doctor told her she had to have an operation to prevent any future pregnancies. Michelle said she did not want the operation but the doctors ignored her and, instead, carried out the sterilisation, permanently ending her ability to bear children.

During her stay at the hospital, nurses would not touch Michelle. On one occasion when she was bleeding, a nurse gave her a cloth and said she had to clean the blood herself to prevent any contagion.

Between 1996 and 2000, the Peruvian authorities embarked on a horrific policy to sterilise poor women in a bid to “fight poverty”. Many women still live with the consequences of this mass sterilisation.

One of the women affected by this is Esperanza, a now 59-year-old woman from the north of Peru. She was forcibly sterilised in 1998.

Since then, she has suffered from back pains which sometimes prevent her from working and has struggled to overcome the psychological impact of having been forcibly sterilised.

Years later, authorities have still failed to provide her or any of the other women with any compensation or treatment to help them with the injuries they suffered.