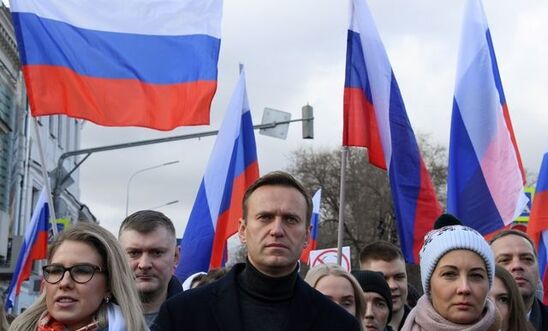 Up to 200,000 Navalny supporters could fall foul of new laws

‘Having unjustly imprisoned its arch foe, the Kremlin is now targeting all those who had the nerve to support him’ - Natalia Zviagina

Three bills adopted today in a first reading by the State Duma, the lower house of the Russian Parliament, threaten to drastically restrict rights and liberties in the country, warned Amnesty International.

The bills are set to target those in Russia who have supported civil society and religious organisations later declared “extremist” or “terrorist”, widening the scope of the law on “undesirable” organisations.

Under the first bill, the authorities intend to punish the exercise of the right to association by barring from public life those who share a critical view of the Government and are working together to bring change.

According to the draft law, those who founded, led, worked for or otherwise participated in the activities of an organisation later designated as “extremist” or “terrorist” and subsequently banned, will be barred from running for the country’s lower house of Parliament for a period of between three and five years after the organisation’s ban comes into force. The bill also provides for its retroactive application.

Aleksei Navalny’s Anti-Corruption Foundation, which has already been declared a “foreign agent”, is now fighting against the authorities’ attempt to designate it as an “extremist organisation”. According to Leonid Volkov, who led Navalny’s regional network before its dissolution in April, up to 200,000 people who contributed to its crowdfunding efforts could fall foul of the new law. While Navalny’s allies and supporters are certainly the main target, the bill will also affect many other civic and religious groups who have been or may be targeted under Russia’s vague “counter-extremism” and “counter-terrorism” legislation.

Two other bills broaden the scope of the law on “undesirable” organisations by introducing a prohibition on participation in their activities abroad, assigning the status of “undesirable” to organisations believed to be intermediaries in financial transactions with those already banned, and toughening criminal sanctions.

The bills propose that criminal liability should come after only one administrative prosecution, not two as at present, and, in some cases, immediately.

“The main target of this latest, particularly brazen attack is the movement led by Aleksei Navalny. Having unjustly imprisoned its arch foe, the Kremlin is now targeting all those who had the nerve to support him.

“This is nothing but a desperate move to annihilate any shred of visible dissent.

“The authorities are ready to punish a significant proportion of the population for exercising their right to freedom of expression and association by further reducing their avenues to effectively participate in public life.

“We urge Russian parliamentarians not to adopt these bills. They are a grave threat to human rights and should be of the most profound concern to Russian society and the international community.”

Amnesty International is a global human rights movement, independent of any government, political ideology or economic interest. Raising concerns about human rights violations against individual candidates, members or supporters of a political party or advocates of a particular political position does not imply that Amnesty supports that party or candidate's platform.