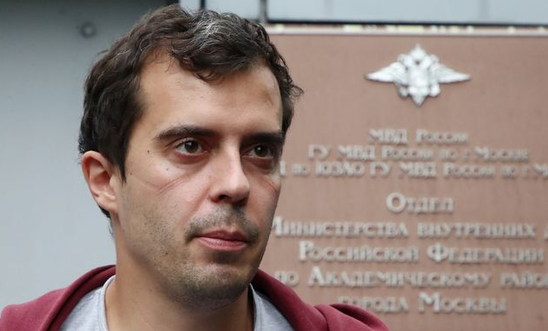 Roman Dobrokhotov’s Moscow apartment raided this morning, along with his parents’ home

Following a raid this morning on the Moscow apartment of the investigative journalist and editor, Roman Dobrokhotov, as well as the home of his parents, Marie Struthers, Amnesty International’s Eastern Europe and Central Asia Director, said:

“This morning’s police raids are a blatant attempt to intimidate a journalist who has made clear his intention not to be silenced by the designation last week of his publication as a ‘foreign agent’.

“Fears are growing that today’s house searches may be a precursor to Roman Dobrokhotov being unjustly named as a suspect in criminal libel case for which he might face up to two years’ imprisonment.

“The Russian authorities must end the harassment of Roman Dobrokhotov, remove the ‘foreign agent’ label from his publication The Insider, and stop the witch hunt against journalists, civil society groups and human rights defenders who challenge Vladimir Putin’s repressive government.”

On 23 July, The Insider, the publication of which Dobrokhotov is the founder and editor-in-chief, was labelled a “foreign agent” by Russian authorities. Dobrokhotov said the media outlet, which is registered in Latvia, would ignore the decision.

Russia’s draconian “foreign agents” law has been widely used to deprive independent civil society organisations and media outlets of funding, tarnish their reputations and subject their staff to intimidation or prosecution. The law has also been amended and applied to individuals to target Russian human rights defenders and political activists. Under the law, the “foreign agents” label is obligatory for publications and other materials issued by public associations and their members, as well as for NGO staff and individuals officially designated as such.