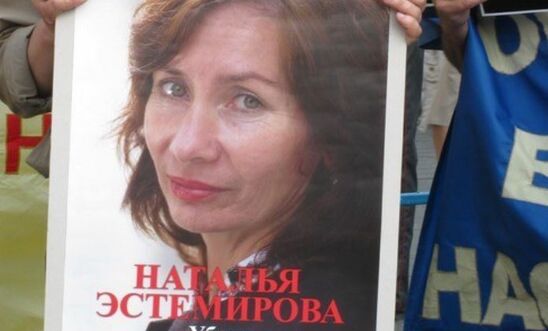 Natalia Estemirova, investigator for NGO Memorial in Chechnya, murdered in 2009

In response to a judgment from the European Court of Human Rights today which ruled that the Russian authorities have failed to properly investigate the murder of Natalia Estemirova, a prominent human rights defender who was abducted and killed in Chechnya in 2009, Denis Krivosheev, Amnesty International’s Eastern Europe and Central Asia Director, said:

“This judgment exposes the impunity surrounding the murder of Natalia Estemirova and the cynical inaction of the Russian authorities.

“Since 2009, the assault on human rights in Chechnya has intensified and civil society has been methodically extinguished by the Chechen authorities.

“To this day, Natalia’s colleagues at the NGO Memorial face death threats, arbitrary arrests and jail, and many journalists and activists have been forced into exile.

“The inaction of the Russian authorities has effectively given the Chechen leadership carte blanche to continue to commit abuses, and to silence anyone who dares to speak out.

“Natalia Estemirova lost her life because she worked relentlessly to document and expose egregious human rights violations committed in Chechnya.

“This heinous, cowardly murder must be fully, effectively and impartially investigated and all those behind it found and brought to justice.”

Natalia Estemirova was a prominent human rights defender who worked for the Russian NGO Memorial in Chechnya. She was known for investigating gross human rights violations, - including enforced disappearances, extrajudicial executions and torture committed by Russian state agents during the 1999-2009 Chechen conflict. She repeatedly drew criticism and threats from the Chechen authorities, including Kremlin-appointed Chechen leader Ramzan Kadyrov. On 15 July 2009, Estemirova was abducted by unidentified armed men in the Chechen capital Grozny and was found dead the same day in neighbouring Ingushetia. No-one has been brought to justice for her killing.

Since Estemirova’s murder, journalists, human rights defenders and civil society activists in Chechnya continue to be harassed, intimidated, attacked, jailed under trumped-up charges and even killed. Many public critics of the Chechen authorities have faced torture, enforced disappearance or extrajudicial execution. The perpetrators of these and other crimes - including those committed during the so-called ‘gay purge’ in 2017 - have enjoyed complete impunity for their actions.