Russia: activist jailed for Putin puppet demo should be freed 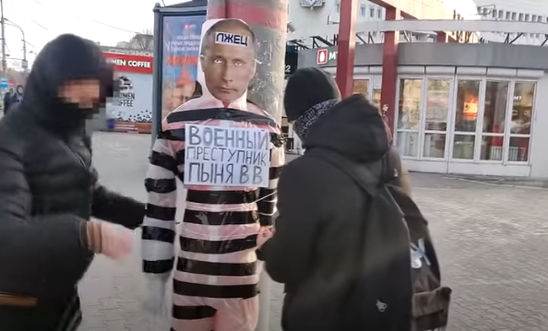 Amnesty International is calling for the immediate and unconditional release of Aleksandr Shabarchin - a Russian activist who was jailed over a satirical video featuring a homemade mannequin of Vladimir Putin.

In August, Shabarchin was sentenced to two years in a penal colony by a court in the city of Perm. His co-accused - Danila Vasiliev, who was under 18 at the time of the incident - received a one-year suspended sentence and a year’s probation for the same “crime”.

The two activists were arrested in November 2018 after they taped a mannequin wearing a mask of President Putin to a lamp post in Perm’s city centre. The word “liar” was written across the puppet’s forehead and “war criminal” across its chest. The activists later uploaded a video to YouTube featured actors “interrogating” the mannequin.

Shabarchin and Vasiliev were convicted of “premeditated violation of the public order committed by a group of people” - under a vaguely-worded article of Russia’s Criminal Code which was previously also used to prosecute and imprison members of the feminist punk band Pussy Riot.

Shabarchin, who has been in a penal colony since August, will have an appeal against his sentence heard by Perm Krai Court tomorrow.

Amnesty is calling for both sentences to be quashed.

“These activists are the latest to fall victim to the Russian authorities’ misuse of vague laws aimed at silencing critics.

“This unjust sentence should be overturned and both young men should be able to continue their peaceful activism without fear of persecution.

“Aleksandr Shabarchin is a peaceful activist who has frequently conducted pickets and street performances to express his views on the Russian government. Although the video he posted may have been offensive or disturbing to some, his action falls within the scope of the right to freedom of expression, which Russia has committed to upholding as a party to the international human rights treaties.

“He did not call for violence and his arrest is typical of the Russian authorities’ harsh response to criticism.

“Aleksandr Shabarchin is a prisoner of conscience, imprisoned solely for the exercise of his right to freedom of expression, and he must be immediately and unconditionally released.”