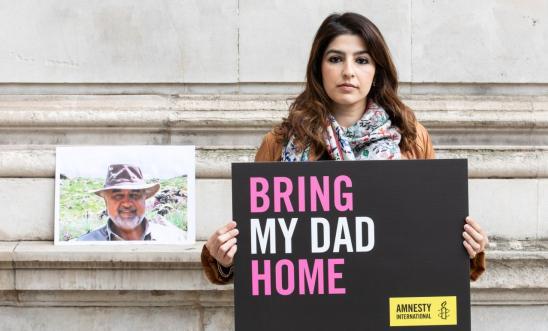 UK national Morad Tahbaz will have been in jail in Iran for 1,618 days

Roxanne Tahbaz will deliver a Father’s Day card and accompanying gift to the Foreign Office on Thursday 16 June (10:30am), with a request that UK officials arrange for them to be taken to her imprisoned father Morad Tahbaz in Iran.

Roxanne will also be renewing her call for the Foreign Secretary Liz Truss to meet her to explain what the UK is currently doing to secure her father’s release.

Tahbaz, a UK national arbitrarily imprisoned by the Iranian authorities for more than four years, is being held in Tehran’s notorious Evin Prison despite his family being assured by UK officials in March that he would be released along with fellow UK nationals Nazanin Zaghari-Ratcliffe and Anoosheh Ashoori.

The Tahbaz family, who have spoken of their “betrayal” by the Government, are calling on Liz Truss and her officials to step up their efforts to secure Tahbaz’s immediate release.

Amnesty International is supporting the Tahbaz family’s efforts and has launched a No-one Left Behind campaign calling for Tahbaz’s release and that of Mehran Raoof, another UK national arbitrarily imprisoned in Iran. Amnesty has recently documented how the Iranian authorities have pursued an unlawful policy of jailing foreign and dual-nationals on trumped-up charges and deliberately using them as hostages for diplomatic purposes.

Tahbaz, 66, who is a US national in addition to his UK nationality and Iranian heritage, is a wildlife conservationist who was jailed - along with seven other conservationists - in January 2018. In 2019, he was given a ten-year prison sentence after an unfair trial. He suffers from a number of serious health conditions, including a history of cancer, and the Iranian authorities have prevented him from receiving important medical care. Tahbaz’s wife, Vida, has also been placed under a travel ban by the Iranian authorities.

Roxanne’s card for Father’s Day - a large card which has been specially produced for the family by Amnesty - features family photographs and the message “It Has Been 1,618 Days Since Morad Was With His Family”.

“Shockingly, another Father’s Day is about to come around with Roxanne and her siblings still cruelly separated from their father.

“Given everything we know about Iran’s track record on arbitrarily detaining foreign nationals, it’s painfully obvious the UK government has failed the Tahbaz family.

“Three months ago, UK officials palmed Roxanne and her family off with false assurances about her father’s imminent release - they now need to make amends for this.

“We’d like UK officials to ensure that Roxanne’s card and present reach her father in Evin, but more importantly they must secure Morad’s release and his return home to the UK as soon as possible.”

“Government officials led us to believe that our father would be released alongside Nazanin and Anoosheh three months ago.

“Even the furlough, which was publicly announced by the Foreign Office, has not been upheld, as my father is still deteriorating in prison.

“At this juncture, there is only one way the Foreign Office can regain the faith we once had in our Government - they need to urgently renegotiate with the Iranian authorities, and this time ensure they bring our father - and mother - home without delay.”

WHAT: delivery of a large, specially-designed Father’s Day and gift to FCDO