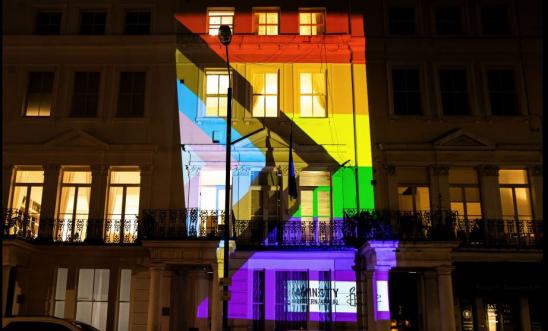 Projections highlight increasing attacks on LGBTI groups, including Sphere, which has been the target of dozens of discriminatory assaults

Pictures of the projections are available to download here (Copyright: Maggie Left)

The Ukrainian consulate building in the UK has been lit up with projections of the Pride rainbow flag to urge the Ukrainian authorities to protect ‘Sphere’ and other LGBTI groups in the country and bring their attackers to justice, Amnesty International said today.

Against a backdrop of increasing hate crimes against LGBTI individuals and groups in Ukraine, organisations like Sphere - which provides a safe space for women and LGBTI people in Kharkiv, Ukraine - have been the target of dozens of discriminatory attacks.

Amnesty  has launched a petition as part of its Write for Rights campaign, urging the Ukrainian authorities to protect Sphere and ensure their attackers are bought to justice.

The rainbow projections - which took place on Ukrainian government buildings in Bangkok as well as London last night - raise awareness of Amnesty’s campaign and shine a spotlight on the dangerous levels of harassment, violence, and hate crimes against LGBTI people in the country.

“Last night, we lit up Ukrainian government buildings in rainbow colours to send a message to the authorities that enough is enough: we will not tolerate hate crimes against LGBTI people in our country.

“There are dangerous levels of violence and abuse against LGBTI people in Ukraine and much more needs to be done to protect them. The police are standing by and letting these crimes happen.

“Organisations like Sphere are so important for ensuring women and LGBTI people have a space where they can feel safe. We can’t sit still and watch as hate groups attempt to tear them apart. They need protection. The authorities must investigate the attacks and hold the perpetrators accountable.”

LGBTI and women’s rights organisation Sphere was founded in 2006 by activists Anna Sharyhina and Vira Chernygina and has been the target of dozens of discriminatory attacks as more and more anti-LGBTI groups have sprung up across Ukraine.

These groups have set upon Sphere’s supporters and its premises – urinating on walls, spreading faeces on doorknobs, breaking windows and chanting homophobic slogans. Anna and Vira report the attacks to the police, but nothing has been done to stop them or hold anyone accountable.

In 2019, Sphere organised Kharkiv’s first ever Pride. Despite threats and intimidation, the event was a huge success, attended by up to 3,000 people. Instead of protecting marchers from violence, the police joined in with hurling homophobic abuse at them. Anna and Vira say that police inaction in the face of constant attacks has left Sphere and its supporters in a permanent state of fear.

"Sphere is trying to create a safe space for LGBT+ people and allies. To achieve this, we conduct educational events and try to cooperate with the authorities. Sometimes it works and, for instance, the police have recently managed to ensure protection of our events. But when it comes to investigating hate crimes, the authorities are turning a blind eye, and this creates dangerous precedents.”

“We are sure that hate crimes on the grounds of sexual orientation and gender identity are not solely aimed at Sphere – they are aimed at terrorising the entire LGBT+ community. The impunity that follows speaks volumes of the government’s disregard of human rights. We demand the authorities to do their work and hold perpetrators of hate crimes accountable. We aim for zero tolerance to hatred in Ukraine and we are grateful to the international community for helping to raise awareness about this issue.”

In recent years, Amnesty has documented the proliferation of violent groups advocating hatred and discrimination across Ukraine. These groups are systematically targeting LGBTI people and LGBTI and women’s rights activists, accusing them of being a threat to “traditional and family values”. Perpetrators of these attacks receive near total impunity. Out of dozens of cases documented by Amnesty since 2017, the organisation found that perpetrators were held accountable in only one case. Even then, the judge did not take into consideration the discriminatory motive of the attack. The lack of justice emboldens these violent groups to plan and carry out new attacks, creating a vicious circle of impunity and causing women’s rights and LGBTI activists to live in fear.

Amnesty’s flagship annual letter-writing campaign, Write for Rights supports activists from around the world who have been attacked, jailed, harassed or disappeared for standing up for their rights.

The global action - which takes place between November and December – calls on people around the world to send cards, emails and tweets of solidarity to individuals or groups of people whose freedoms are being denied, and to write letters putting pressure on those in power to stop the abuses being committed against them.

This year, Write for Rights - which is funded by players of the People’s Postcode Lottery - supports ten individuals and groups, including Anna, Vira and the Sphere organisation. Members of the public are being encouraged to sign a petition demanding the Ukrainian authorities take action to bring Sphere's attackers to justice.

“We hope that people from all corners of the world sign this petition. Knowing that there are high levels of support for LGBTI rights in Ukraine will provide a much-needed boost to the individuals who have suffered at the hands of hate crime in this country. And hopefully, if people come together and make noise, the authorities will be forced to listen and act.”