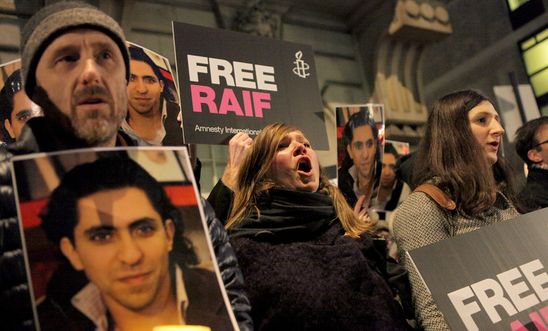 One million have now lent support to #FreeRaif campaign

Further floggings of Saudi Arabian blogger Raif Badawi could cause debilitating long-term physical and mental damage, a medical expert from the charity Freedom from Torture has warned in a new medical analysis commissioned by Amnesty International.

Mr Badawi, a 31-year-old blogger and free speech activist whose ten-year jail sentence and 1,000-lash punishment has caused a storm of international protest, is at risk of a repeated round of flogging tomorrow. On 9 January Badawi was subjected to 50 lashes in a public square in the city of Jeddah, while two subsequent scheduled lashing sessions were called off on medical grounds.

Dr Juliet Cohen, Head of Doctors at Freedom from Torture, believes the impact of a second set of lashes is likely to be even worse than the first. She said:

“The more blows are inflicted on top of one another, the more chance of open wounds being caused. This is important because they are likely to be more painful and at risk of infection, which will cause further pain over a prolonged period as infection delays the wounds’ healing.”

Dr Cohen also said the shirt Mr Badawi was wearing at the time of his 9 January flogging would not have provided much protection from the force of the cane’s blows:

“When the cane strikes, the blood is forced from the tissues beneath ... Damage to the small blood vessels and individual cells causes leakage of blood and tissue fluid into the skin and underlying tissue, increasing the tension in these areas.”

Further impact from blows of the cane to these areas can cause the skin to split, particularly on a bony part of the body, so that an open wound appears. In addition to the horrendous physical effects of flogging, victims also endure mental torment as a result of the punishment, explained Dr Cohen. She said:

“Psychologically, flogging may cause feelings of fear, anxiety, humiliation and shame. Anticipation of the next scheduled flogging is likely to cause heightened emotions especially of fear, anxiety and difficulty sleeping ... pain and fear together over a prolonged period have a deeply debilitating effect and recovery from such experiences may take considerable time.”

“Flogging Raif Badawi was an unspeakably cruel and shocking act by the Saudi Arabian authorities.

“Raif Badawi is a prisoner of conscience, whose only ‘crime’ was to set up a website for public discussion, and the Saudi authorities must end their vicious campaign against him.”

Though Badawi’s case is thought to be the subject of a review by Saudi Arabia’s Supreme Court, Amnesty fears he may be flogged again soon. Over one million people have supported an Amnesty campaign calling for the Saudi authorities to definitively call off the flogging and release Mr Badawi.

Meanwhile, Amnesty has been sharply critical of the UK government for failing to speak out strongly about the case, with the organisation accusing UK ministers of “wearing the Saudi muzzle” in their muted response.

In Raif Badawi’s case, the involvement of doctors has led to the suspension - at least temporarily - of his punishment. But involving medical professionals in the process is itself of serious concern as they could be forced to sanction such punishments, contrary to the most fundamental principle guiding the work of physicians: not to inflict harm intentionally. Earlier this month, Amnesty - along with the British Medical Association and Freedom from Torture - staged a conference of medical health professionals to discuss the ethical and practical challenges facing forensic physicians as they confront torture.