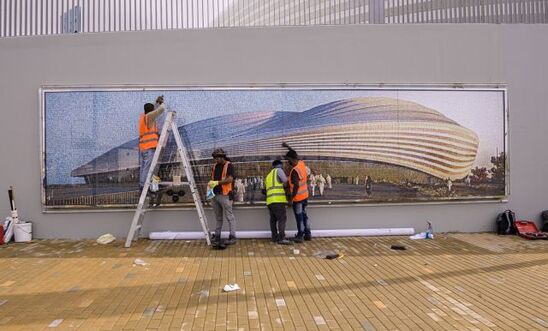 Fifa must fulfill responsibility to press for changes

‘It’s more important than ever that England’s coaching staff, players and supporters raise human rights issues ahead of next year’s kick-off’ - Sacha Deshmukh

With just one year to go until the 2022 Fifa World Cup in Qatar, time is running out for the authorities in the Gulf state to deliver on promises to abolish the abusive “kafala” sponsorship system and better protect huge numbers of migrant workers, Amnesty International said today.

In its 48-page report - “Reality Check 2021” - assessing Qatar’s progress in overhauling its exploitative labour system, Amnesty found that progress has stagnated over the last year and old abusive practices have resurfaced, reviving the worst elements of kafala and undermining recent reforms.

The daily reality for many migrant workers in the country remains harsh, despite legal changes introduced since 2017. Amid mounting scrutiny of Qatar’s human rights record as the World Cup approaches, Amnesty is calling on the Qatari authorities to take urgent action to ramp up the reform process before it is too late.

Jacob*, a migrant worker who has been in Qatar for more than five years, said:

“Change came on paper but [not] on the ground … When you go inside the company and among the workers [you see that] only a very small change has happened. It is still appalling.”

Qatar has introduced a number of welcome labour reforms since 2017. These include a law regulating working hours for live-in domestic workers, labour tribunals to facilitate access to justice, a fund to support payment of unpaid wages, and a minimum wage. Qatar has also ratified two key international human rights treaties, though without recognising the right of migrant workers to join a trade union.

But a failure of implementation means exploitation continues. For example, although Qatar has repealed a requirement to obtain an exit permit and a “no-objection certificate” from an employer for most migrant workers, allowing them to leave the country and move jobs without seeking their sponsor’s consent, a de facto no-objection certificate process has emerged and problematic elements of kafala remain in place. This includes the ability of abusive employers to block migrant workers’ job transfers and control their legal status.

Aisha, who works in the hospitality sector, described being threatened by her employer when she refused to sign a new contract with him and expressed a wish to change employers instead. She was told she had to pay 6,000 Qatari riyals (£1,200) - more than five times her monthly salary - for a no-objection certificate or else be sent home. Although the change in law should have allowed Aisha to change jobs freely, the complaint she submitted to the Ministry of Administrative Development, Labour and Social Affairs was rejected.

“The whole situation had a big impact on me but also on my family because as a main breadwinner it is not easy to handle this situation. Sometimes I feel I do not want to wake up in the morning.”

“The clock is ticking but it’s not too late to turn the ink on paper into real action.

“Now is the time for the Qatari authorities to be bold and fully embrace their programme of labour reforms; any progress to date will be wasted if Qatar settles for weak implementation of policies and fails to hold abusers to account.

“Apparent complacency by the authorities is leaving thousands of workers at continued risk of exploitation by unscrupulous employers, with many unable to change jobs and facing wage theft. They have little hope of remedy, compensation or justice. After the World Cup, the fate of the workers who remain in Qatar will be even more uncertain.

“Qatar is one of the richest countries in the world, but its economy depends on the two million migrant workers who live there. Each of them has a right to be treated fairly at work, and to obtain justice and compensation when they face abuses.

“By sending a clear signal that labour abuses will not be tolerated, penalising employers who break laws and protecting workers’ rights, Qatar can give us a tournament that we can all celebrate. But this is yet to be achieved.”

While the no-objection certificate has been abolished in law, organisations supporting migrant workers and embassies in Doha say a failure to include a form of written approval from the current employer appears to increase the chance of a job transfer request being rejected. This in turn has given rise to an “no-objection certificate trade” which has become a lucrative business for some abusive employers.

Other abusive practices include withholding salaries and benefits to make it harder for workers to leave their jobs. Migrant workers are also still dependent on their employers to enter and stay in Qatar, giving rise to the use of “absconding” charges and the cancellation of resident permits which abusive employers use to control their workforce.

In its report, Amnesty also found that late- and non-payment of wages and other contractual benefits remain some of the most common forms of exploitative practice facing migrant workers in Qatar. Yet access to justice remains scarce and workers are still prohibited from organising themselves to collectively fight for their rights.

In August, Amnesty documented the Qatari authorities’ failure to investigate the deaths of thousands of migrant workers in recent years notwithstanding evidence of links between premature deaths and unsafe working conditions. Despite introducing some new protections for workers, major risks remain - for example, new regulations do not include mandatory rest periods proportionate to the climate or work undertaken - and the authorities have done little to investigate the scale of unexplained deaths.

Amnesty is also calling on World Cup organiser Fifa to live up to its responsibilities to identify, prevent, mitigate and remedy human rights risks connected to the tournament. This includes risks to workers in industries like hospitality and transport, which are expanding massively to facilitate the delivery of the competition. It also needs to use its voice, both publicly and privately, to call on the Qatar government to fulfill its programme of labour reforms before the opening match of the World Cup on 21 November next year.

Last month, Amnesty said that former England captain David Beckham should use his reported new position as a highly-paid ambassador for football in Qatar to “keep the world’s focus on the human rights issues surrounding the matches” at the World Cup next year. Amnesty said that Beckham has a “unique worldwide profile” which offers wide opportunities to highlight human rights issues in Qatar.

“The exploitation of Qatar’s massive migrant workforce has already cast a dark shadow over next year’s World Cup, and the FA ought to use the remaining year until kick-off to push for lasting labour reforms in Qatar.

“The FA is part of the UEFA Working Group on Workers’ Rights in Qatar and can press the Doha authorities over strengthening migrant worker protections, investigating worker deaths and helping to fashion a tournament with a genuinely positive legacy.

“It’s more important than ever that England’s coaching staff, players and supporters raise human rights issues ahead of next year’s kick-off.”

*The name has been changed to protect his identity.