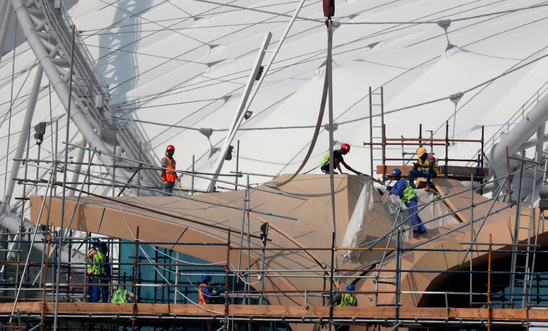 ‘Qatar is one of the richest countries in the world - not only can it afford to do far better, it has an obligation to do so’ - Steve Cockburn

The Qatari authorities have failed to investigate the deaths of thousands of migrant workers over the past decade despite evidence of links between premature deaths and unsafe, searingly-hot working conditions, Amnesty International said today in a new report.

Amnesty’s 56-page report - In the Prime of their Lives - shows how the Qatari authorities routinely issues death certificates for migrant workers without conducting adequate investigations - instead attributing deaths to “natural causes” or vaguely-defined cardiac failures.

These death certifications - described by one leading pathologist as “meaningless” - rule out the possibility of compensation for bereaved families, many of whom are already facing financial difficulties after losing their main breadwinner.

After a decade of international pressure in the lead-up to the 2022 World Cup, Qatar recently introduced new protections for workers, but the country’s very high summer temperatures combined with excessive and physically strenuous working hours continue to pose significant risks to workers.

As well as consulting medical experts and reviewing government data on thousands of deaths, Amnesty analysed 18 death certificates and interviewed the families of six male migrant workers, all of whom were between 30 and 40 when they died. Of the 18 death certificates (issued between 2017 and 2021), 15 provided no information about underlying causes - instead using terms such as “acute heart failure natural causes”, “heart failure unspecified” and “acute respiratory failure due to natural causes”. Similar phrases were used in reports for more than half of the 35 deaths recorded as “non-work related” on World Cup facilities since 2015 - suggesting meaningful investigations were unlikely to have been carried out in these cases.

Epidemiological experts have said that in a well-resourced health system it should be possible to identify the exact cause of death in all but 1% of cases, but Amnesty’s review of data from major labour-sending countries found that the rate of unexplained migrant worker deaths in Qatar may be close to 70%.

Dr David Bailey, a leading pathologist and member of the WHO Working Group on death certification, told Amnesty:

“These are phrases that should not be included on a death certificate without a further qualification explaining the underlying cause. Essentially, everyone dies of respiratory or cardiac failure in the end and the phrases are meaningless without an explanation of the reason why.”

Amnesty is calling on Qatar to strengthen its laws to protect workers from extreme heat, by introducing mandatory rest breaks in line with the risks they face, and to improve the investigation, certification and compensation of migrant workers' deaths.

Amnesty is also calling on all national Football Associations - including the English FA - to press world footballing body FIFA to use its influence with the Qatar authorities to press for further labour reforms ahead of next year’s World Cup tournament.

“When relatively young and healthy men die suddenly after working long hours in extreme heat, it raises serious questions about the safety of working conditions in Qatar.

“In failing to investigate the underlying causes of migrant workers’ deaths, the Qatari authorities are ignoring warning signs which could, if addressed, save lives.

“The failure to investigate, remedy and prevent the deaths of migrant workers is a breach of Qatar's obligation to uphold and protect the right to life. Qatar is one of the richest countries in the world - not only can it afford to do far better, it has an obligation to do so.

“Qatar must establish a specialist team to properly investigate the death of every worker and ensure that compensation is paid in any case where working conditions such as exposure to extreme heat cannot be ruled out as a contributing factor.

“If workers have been exposed to dangerous conditions such as extreme heat and no other cause of death can be established, Qatar must provide families with adequate compensation and take immediate action to strengthen protections for other workers.”

“Migrant worker deaths are casting a long shadow over the 2022 World Cup.

“The FA, as part of the UEFA Working Group on Workers’ Rights in Qatar, should be at the forefront of concerted efforts within FIFA to press Qatar to urgently strengthen migrant worker protections, and to investigate deaths and compensate families.

“England players, staff and supporters can use their influence by keeping the issue of migrant worker rights in Qatar in the public eye. There is still an enormous amount to play for.”

Amnesty’s analysis of deaths data from multiple sources indicates that migrant worker deaths are going unexplained on a large scale. With many deaths categorised as “cardiovascular diseases”, there may be a high number of deaths that are - in reality - unexplained. As Amnesty’s report shows, medicals experts have outlined a range of techniques that should be used to diagnose the cause of death in cases where exposure to extreme heat may be a factor. These include investigations into workplace conditions, a worker’s medical history, and various medical examinations to rule out alternative causes of death.

Deaths data from South Asian countries - which provide a large majority of Qatar’s workers - appears to reinforce concerns that deaths are routinely left uninvestigated. For example, Bangladeshi government records show that 71% of deaths of Bangladeshi nationals in Qatar between November 2016 and October 2020 were attributed by the Qatari authorities to “natural causes”. An investigation by the Guardian also found that 69% of deaths among Indian, Nepali and Bangladeshi workers between 2010 and 2020 were attributed to natural causes.

Official statistics show that 15,021 non-Qataris have died in the country between 2010 and 2019. This does not equate to the number of migrant workers who have died because of working conditions, as it includes people of all ages, occupations and causes. Government data also does not indicate how many workers have died in preparation for the World Cup. Qatar’s Supreme Committee on Delivery and Legacy says that 35 workers on World Cup projects they oversee have died since 2015, but there is no estimate of how many workers have died on other infrastructure projects linked to the delivery of the tournament.

Since being awarded the 2022 FIFA World Cup in 2010, Qatar has made several significant positive reforms to its labour laws. But weak implementation and enforcement mean that progress on the ground has been slow, and exploitation remains commonplace. Many migrant workers remain at the mercy of unscrupulous employers, who are allowed to commit abuses with impunity.

Amnesty investigated the deaths of six migrant workers in detail - four construction workers, one security guard and one truck driver. None of the men had any known underlying health conditions and all had passed mandatory medical tests before traveling to Qatar. None of their families have received compensation. The six are:

•    Manjur Kha Pathan (40): worked 12 to 13 hours a day as a lorry driver. He had complained that the air conditioning in his cabin was faulty. He collapsed in his accommodation on 9 February 2021 and died before an ambulance arrived.

•    Sujan Miah (32): worked as a pipe fitter on a project in the desert. His workmates found him dead in his bed on the morning of 24 September 2020. During the four days leading up to his death, temperatures in Qatar had exceeded 40°C.

•    Tul Bahadur Gharti (34): worked in construction. He died in his sleep on 28 May 2020 after working for around ten hours in temperatures that had reached 39°C.

•    Yam Bahadur Rana (34): worked as an airport security guard, a job which involved long hours being outside in the sun. He died at work on 22 February 2020.

Amnesty interviewed the six men’s families in Nepal and Bangladesh. Family members emphasised their shock at the deaths, stressing that they believed their relatives had been in good health. Several described the extreme heat and difficult conditions their relatives had regularly been exposed to at work.

“I had never heard him mention a single illness ... it was hard to believe when I heard the news of his sudden death … My husband was set on fire. I feel like I’m burning in oil.”

“[My husband] had to sit in the sun for a long time. I feel like he had a heart attack due to dryness and heat because I never knew he was sick.”

Amnesty met construction worker Suman Miah’s family, including his two young children, at their home in Bangladesh. They heard about Suman’s death from his co-workers. They were not contacted by the Qatari authorities or offered an autopsy. Suman’s wife, Sumi Akter, said, “I could not believe the news at first. I had talked to him a few hours earlier”. The Bangladeshi Welfare Board gave Suman’s family 300,000 Bangladeshi taka (£2,500), but this was used to pay off debts incurred from recruitment fees paid during his migration to Qatar.

Plaster Mohammad Kaochar Khan had also paid recruitment fees to get his job in Qatar. His family had partly funded the 350,000 Bangladeshi taka (£3,000) fee by selling land and taking out loans. They were also provided with financial assistance by the Bangladeshi government, which they used to pay off Mohammad’s recruitment debt. Mohammad’s brother, Didarul Islam, told Amnesty, “All our dreams vanished when my brother passed away”.

The struggles bereaved families are now facing illustrate the cycle of exploitation which continues to ensnare so many migrant workers in Qatar. None of the families Amnesty interviewed were offered any form of post-mortem examination to identify the underlying cause of death of their loved ones. This meant it could not be determined whether working conditions had contributed, thereby precluding the possibility of compensation from either employers or the Qatari authorities.

A state’s duty to protect the right to life, as well as its obligations to ensure healthy working and environmental conditions, includes adopting laws or other measures to protect from reasonably foreseeable threats. One of the most documented and foreseeable risks to workers’ life and health in Qatar is exposure to extreme heat and humidity, which has been the subject of numerous reports.

In 2019, the Qatari government commissioned an independent study into heat risks. It found that workers provided with only the minimal protections required by Qatari law at that time were at significantly higher risk of heat stroke than a group on a World Cup project, where workers generally had higher standards of protection. A 2019 study in the journal Cardiology found a correlation between heat and Nepali worker deaths in Qatar, concluding that “as many as 200 of the 571 cardiovascular deaths [of Nepali workers] during 2009-17 could have been prevented” with effective heat protection measures.

Until recently the main protection against occupational heat stress in Qatar was a ban on outdoor working at certain hours during 15 June and 31 August - there were no restrictions for the rest of the year. In May 2021, Qatar extended the summer working hours ban to 1 June-15 September and introduced other requirements including a prohibition on outdoor work when an index measuring heat/humidity reaches 32 degrees. The new legislation also gives workers the right to stop working and submit a complaint to the Ministry of Administrative Development, Labour and Social Affairs if they are concerned about heat stress.

Professor David Wegman, an expert on health and safety in the construction industry, told Amnesty that though the new law is an improvement, it “falls far short of what is necessary for the protection of labourers who are subject to heat stress exposures of all types”.

While new regulations do provide some greater protections, they do not include mandatory rest periods proportionate to the climate conditions and nature of work undertaken. Instead, they grant workers the right to “self-pace” in hot weather. Given the extremely unequal power relations between workers and employers in Qatar, relying on “self-pacing” is unlikely to be feasible for many workers.

Downloads
In the Prime of their Lives