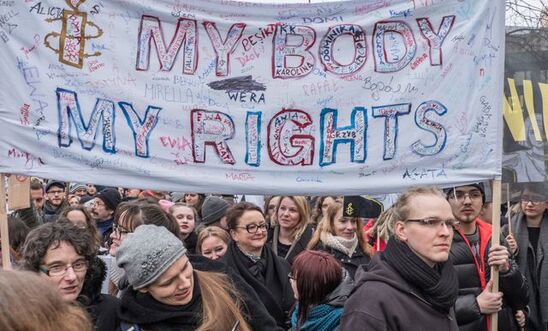 ‘This judgment is the result of a coordinated, systematic wave of attacks on women’s human rights by Polish lawmakers’ - Esther Major

The Polish Constitutional Tribunal’s ruling earlier today to invalidate the constitutionality of access to abortion on the ground of “severe and irreversible foetal defect or incurable illness that threatens the foetus’ life”* will further harm women and girls and violates their human rights, Amnesty International, the Centre for Reproductive Rights and Human Rights Watch, said today.

“This judgment is the result of a coordinated, systematic wave of attacks on women’s human rights by Polish lawmakers and represents their latest attempt to ban abortion in Poland.

“Legal prohibitions on abortion do not prevent abortion or reduce the rates of abortion - they serve only to damage women’s health by pushing abortions underground or forcing women to travel to foreign countries to access abortion care they need and to which they have a right.

“Although all women may be affected by this cruel judgment, marginalised groups of women who cannot afford to travel will disproportionately suffer the consequences of the judges’ actions today.”

Leah Hoctor, regional director for Europe at the Centre for Reproductive Rights, said:

“Today’s judgment puts the health and lives of women in Poland at great risk, and violates Poland’s obligations under international human rights treaties to refrain from retrogressive measures that roll back women’s rights to sexual and reproductive health care.

“Poland must act now to bring its law into line with other EU member states and legalise abortion on a woman’s request or broad social grounds, and guarantee women’s full and effective access to care in situations where women’s physical or mental health is at risk.”

“Instead of safeguarding and protecting people’s rights, Poland’s Constitutional Court has contributed to violating them.

“The European Commission and EU member states should urgently address breaches of rule of law and their impact on fundamental rights in Poland. Ensuring women’s human rights, including their reproductive rights, is essential to upholding EU values.

“Poland’s flagrant disregard for these values is dangerous not only for women and girls in Poland, but throughout Europe. Women in Poland have sustained attacks against their rights again and again, and will not stop fighting for their right to abortion care. We stand with them every step of the way.”

Poland has one of Europe’s most restrictive abortion laws. It is one of only two of 27 EU member states that do not allow abortion on request or on broad social grounds. Under Polish law, abortion is only permitted to safeguard the life or health of women, or where the pregnancy results from rape. Prior to today’s ruling it was also legal in situations of “severe and irreversible foetal defect or incurable illness that threatens the foetus’ life.” Even in situations in which abortion is legal, multiple barriers combine to severely limit access to care in practice.

Poland’s ruling Law and Justice party has repeatedly moved to further curb sexual and reproductive health and rights, including through a bill that would have enacted a total abortion ban. Such attempts have been met by mass public protests and condemnation by international human rights bodies and European institutions.

Amnesty, the Centre for Reproductive Rights and Human Rights Watch sent independent expert monitors to observe the hearing of the Polish Constitutional Tribunal and analyse the decision regarding the constitutionality of access to abortion on the ground of “severe and irreversible foetal defect or incurable illness that threatens the foetus’ life”.

* Article 4a, sec. 1 point 2 and Article 4a sec. 2, first sentence of the Act on Family Planning, Human Embryo Protection, and Conditions of Legal Pregnancy Termination.