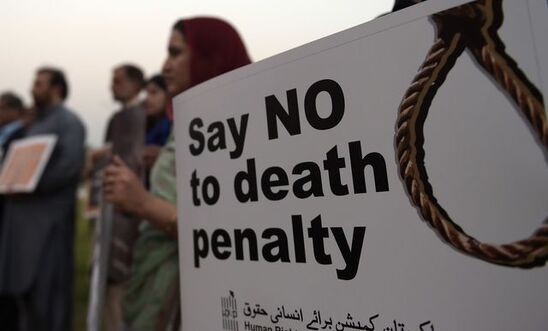 Fresh call for abolition of death penalty in all cases

Ruling ‘marks an important development not only for the death penalty, but also for mental health’ - Rimmel Mohydin

Responding to today’s judgement by Pakistan’s Supreme Court commuting the death sentences of Imdad Ali and Kanizan Bibi and placing a ban on the imposition of the death penalty on those with mental disabilities, Rimmel Mohydin, Pakistan Campaigner at Amnesty International, said:

“This landmark judgment from Pakistan’s Supreme Court marks an important development not only for the death penalty, but also for mental health.

“Imdad Ali and Kanizan Bibi should have been taken off death row the moment their history of severe mental disabilities was brought to the fore.

“This historic precedent puts a stop to the execution of other prisoners with similar conditions, many of whom have yet to be diagnosed.

“However, ultimately the death penalty itself must be abolished, and we urge Pakistan to re-establish an official moratorium on all executions as a first step in that direction.”

According to the Justice Project Pakistan human rights group, Imdad Ali and Kanizan Bibi - both convicted of murder and on death row since 1991 and 2002 respectively - have been diagnosed with schizophrenia on numerous occasions. Earlier today, the Supreme Court commuted both of their death sentences, saying:

“After considering the material discussed herein above, we hold that if a condemned prisoner, due to mental illness, is found to be unable to comprehend the rationale and reason behind his/her punishment, then carrying out the death sentence will not meet the ends of justice.”

Amnesty opposes the death penalty in all cases and under any circumstances as a violation of the right to life, viewing it as the ultimate cruel, inhuman and degrading punishment.