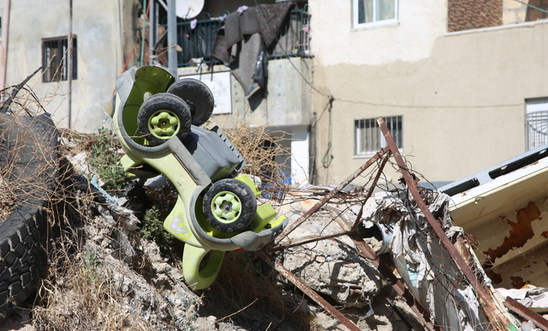 Palestinian-owned buildings in Silwan, East Jerusalem, have been demolished on the orders of the Israeli municipal authorities © Amnesty International

Ahead of an appeal hearing at the Jerusalem District Court tomorrow (26 May) over the forced eviction of two Palestinian families in the Batn al-Hawa area of Silwan in occupied East Jerusalem, Saleh Higazi, Amnesty International’s Middle East Deputy Director, said:

“This is yet another illustration of Israel’s criminal policy of forced displacement of Palestinians in motion.

“By continuing to pursue this court case - after the outcry over the planned forced evictions in Sheikh Jarrah in occupied East Jerusalem - Israel is fanning the flames of the latest upsurge in violence and perpetuating the same systematic human rights violations against Palestinians that are at the root of the latest violence.

“For years Israel has sought to expand illegal settlements in the area of Silwan, forcibly displacing more than 200 Palestinians from their homes.

“The recent protests locally and worldwide against forced evictions in Sheikh Jarrah send a clear message that Israel’s land grabs will not go unnoticed.

“Israel’s authorities must immediately halt plans for forced evictions in Batn al-Hawa in Silwan and any other areas of the Occupied Palestinian Territories. Such forced evictions flagrantly violate the prohibition in international humanitarian law of forcible transfer and amount to war crimes.”

Last year, seven eviction rulings were issued by the Jerusalem Magistrate Court ordering the eviction of seven Palestinian families in Batn al-Hawa to be replaced by settlers. Two of the families - the Najah family and the Kayed al-Rajabi family - are due to have their appeal cases heard tomorrow.

Ateret Cohanim, a settler organisation, has been seeking - with the support of the Israeli authorities - to forcibly evict some 100 Palestinian families from the Batn al-Hawa area in Silwan, claiming the land is rightfully owned by a Jewish trust active in the area more than 100 years ago. While Israeli law allows for property to be transferred to Jews, it denies the same right to Palestinians who have been dispossessed of their property following the establishment of the state.

Silwan targeted by settlers since 1980s

Silwan, home to around 33,000 Palestinians, is located outside the walls of the Old City and its holy sites. Several hundred Israeli settlers now live there as well as in heavily-protected settlement compounds. Israel has been moving its citizens into the area since the 1980s. This has resulted in numerous human rights violations, including the forced eviction and displacement of Palestinian residents. East Jerusalem is part of the occupied West Bank that Israel illegally annexed in 1967 and where Israeli civil law applies, contrary to the provisions of the international law of occupation.