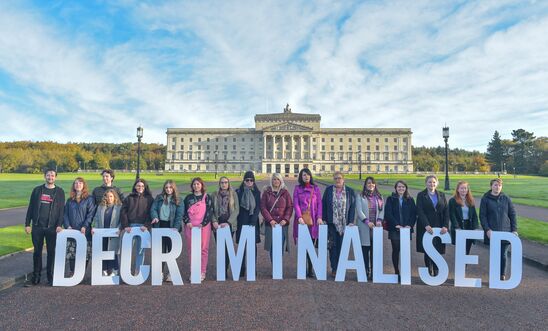 ‘We now have a postcode lottery for abortion services’ - Grainne Teggart.

breakdown and are putting women in a vulnerable and dangerous position, Amnesty International and Informing Choices NI (ICNI) said today, ahead of the anniversary of abortion becoming decriminalised in Northern Ireland (00.01 hrs, 22 October).

One year since the old restrictive abortion law was scrapped, the Health Minister has failed to commission abortion services, leaving local health trusts to provide the service without any extra funding or resourcing.

The added pressure of the Covid-19 pandemic has left the trusts struggling to cope. The Northern Healthcare Trust was recently forced to close its early medical abortion (EMA) service which has left 10 out of Northern Ireland’s 26 local areas without the service.

Women who live in areas within the Northern Trust - including Antrim, Cookstown, Magherafelt, Ballymena, Ballymoney and Coleraine - were expected to be transferred to other trusts but this is not happening due to a lack of capacity. While a funded service remains in place in England, travel is neither a safe nor viable option for many due to the pandemic.

“The Health Minister’s failings have left women in a vulnerable and dangerous position.

“It’s utterly shameful that a whole year since abortion was decriminalised, the Health Minister

has failed to commission services and has completely neglected the needs of both women and our healthcare service. Instead, he has left it to our health trusts and charities to provide these services with zero additional support.

“We now have a postcode lottery for abortion services, where women in one trust area are effectively unable to access early medical abortion healthcare – their only option to buy pills online or put themselves in danger by travelling during a pandemic.

“Abortion is now legal and no-one in need of the service must be refused. The Health Minister needs to urgently step up and take action, including commissioning full and accessible services and introducing telemedicine.”

Abortion regulations took effect in March this year. Since then, health trusts have been providing services, including an interim early medical abortion service to ensure access whilst services are commissioned. This service has been facilitated through ICNI which act as the Central Access Point. This has enabled people from across Northern Ireland to contact a single telephone number to access information, pregnancy choices counselling and, if/when requested, referral into an EMA service within Northern Ireland’s health trusts.

Ruairi Rowan, Director of Advocacy and Policy at ICNI, said:

“The Central Access Point has been a life-line for women and girls experiencing an unplanned or crisis pregnancy, but recent developments within the Northern Trust have shown how precarious the interim arrangements are.

“Since the new abortion framework was established it has been left up to health trusts and ICNI to absorb the needs of women, but without additional resources we’re seeing the services struggle to cope.

“The sustainability of services will always be in question until commissioning takes place. Therefore, we call on the Health Minister to urgently begin the commissioning process, including the use of telemedicine, before the services collapse everywhere.”

As well as the Central Access Point service, ICNI also provide post pregnancy counselling for those who have experienced pregnancy loss – either through abortion, miscarriage or stillbirth – have experienced a traumatic birth or suffer from postnatal depression or anxiety. To access this service please call the helpline on 028 9031 6100.