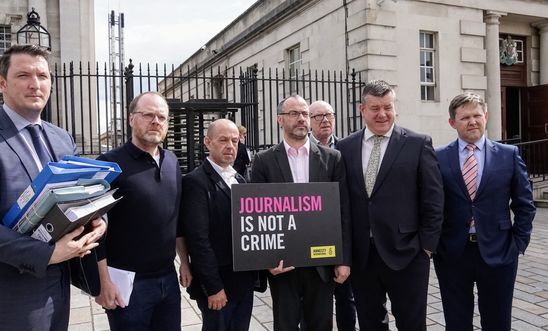 Amnesty International has welcomed the judgment in a judicial review in Belfast that has quashed the warrant authorising police raids on the homes and offices of investigative journalists Trevor Birney and Barry McCaffrey.

The two were arrested and questioned by police in August 2018 in connection with the documentary film ‘No Stone Unturned’ which investigated the Loughinisland massacre of 1994.

The full judgment today in Belfast High Court followed an initial ruling in May 2019 which ordered the police to hand back files and other material seized in the raids ‘forthwith’.

“This is a landmark decision for press freedom in the UK. The police acted outrageously against the two journalists in this case, and it is welcome that Northern Ireland’s Lord Chief Justice has now set out guidance which should mean this sort of undue interference with press freedom never happens again.

“As a result of their wrongful actions, the police damaged public confidence in policing in Northern Ireland. The Chief Constables of Durham Constabulary and the PSNI owe apologies to Trevor Birney and Barry McCaffrey, their families and colleagues.

“It has been deeply troubling to see police trying to jail journalists who helped expose human rights abuses, rather than bring to justice the killers who took the lives of six innocent people.

“It remains unacceptable that the bereaved families of Loughinisland are today not an inch closer to justice than 26 years ago, when the police promised they would leave ‘no stone unturned’ in the pursuit of the killers.”

In a judicial review at Belfast High Court, Trevor Birney and Barry McCaffrey challenged the legitimacy of the search warrants used by police to carry out the raids. Both the Police Service of Northern Ireland (PSNI) and Durham Constabulary were involved in the criminal investigation.

The journalists were arrested and questioned by police in August 2018 in connection with the documentary film ‘No Stone Unturned’.

They were arrested in connection with an alleged breach of the Official Secrets Act, relating to confidential documents about the police investigation of the murder of six men in a bar in the village of Loughinisland, County Down, in 1994.

The 2017 film, ‘No Stone Unturned’ – directed by Oscar-winning film-maker Alex Gibney – explored the unsolved killings and police investigation in detail

In August 2018, it was estimated that up to 100 police officers from the PSNI and Durham Constabulary raided the journalists’ homes and offices, seizing documents and computers, which the men are fighting to have returned.

The pair were never charged but remained on bail for nine months. In June 2019, following the initial the High Court ruling, Durham Constabulary dropped the criminal investigation of the two journalists and the PSNI returned computers, phones, cameras, notebooks, files and other physical material seized. There is ongoing mediation to resolve the matter of information retained data on police computers.