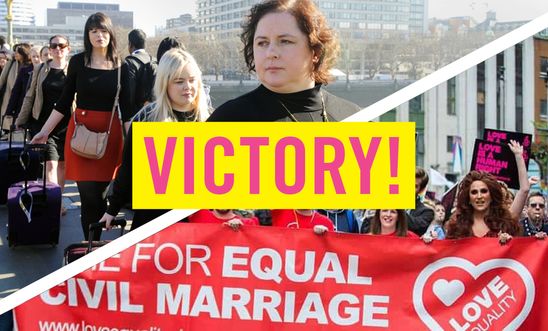 ‘Today is a momentous win for women’s rights. Northern Ireland’s 158-year-long abortion ban has finally been brought to an end’ – Grainne Teggart

Landmark legislation on abortion and equal marriage in Northern Ireland has passed its final stage in the UK Parliament.

Amnesty International - which has been working closely with MPs and peers and campaigning on both issues for many years - heralded the Westminster move as “historic”.

The deadline for the new same-sex marriage law to come into force is January 2020, and the date by which full abortion regulations must be implemented is March 2020, with some elements happening sooner. Abortion will be decriminalised and women currently facing criminal trial will have their prosecutions dropped from 22 October this year.

“This is a historic day for human rights.

“Nowhere on these islands have people had to fight longer and harder for their human rights than in Northern Ireland.

“Future generations in Northern Ireland will no longer have to suffer inequality in the way so many have had to endure in the past.

“Now, Amnesty’s attention will focus on ensuring the speedy implementation of access to healthcare and marriage for people in Northern Ireland.”

The Bill delivers long awaited abortion law reform, including decriminalisation. This will stop women being prosecuted for accessing abortion and introduce a suspension for current cases.

“Today is a momentous win for women’s rights. Northern Ireland’s 158-year-long abortion ban has finally been brought to an end.

“Abortion will be decriminalised and women currently facing criminal trials will have their prosecutions dropped within a few months.

“These reforms are a giant step forward, and an important recognition of women’s right to healthcare in Northern Ireland.

“After many years of fighting through the courts alongside women such as Sarah Ewart and building cross party support at Westminster, this is finally the equality we deserve.”

Amnesty has been supporting Sarah Ewart, who was forced to travel for an abortion in 2013 despite her pregnancy being given a fatal foetal abnormality diagnosis, and who has a case before Belfast High Court.

“It’s an overwhelming relief that we’re finally seeing an end to the abortion law that has caused so many women like me huge amounts of pain. We’ve wanted reform and justice for so long, and now we’ve got it. We’ve spent years fighting alongside Amnesty through the courts and at Westminster, and finally our calls have been answered. Finally, we will have the space and dignity in law to make private healthcare choices.”

Amnesty International has been leading the campaign for abortion law reform in Northern Ireland for more than five years. Key moments in the campaign include: