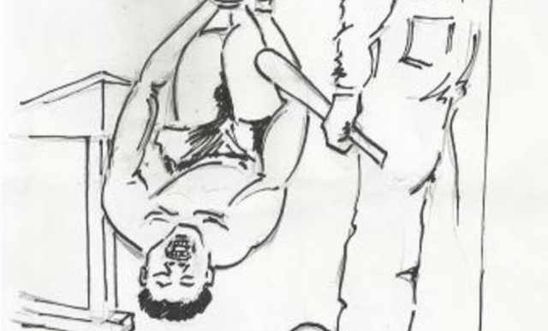 “The policemen asked me to sign a plain sheet. When I signed it, they told me I have signed my death warrant. They left me hanging on a suspended iron rod… When I was about to die they took me down and poured water on me to revive me.” – 25-year-old fuel attendant

A Nigerian police unit set up to combat violent crime has been systematically torturing detainees in its custody as a means of extracting confessions and lucrative bribes, Amnesty International said in a report published today (21 Sept).

Former detainees told Amnesty they had been subjected to horrific torture methods, including hanging, starvation, beatings, shootings and mock executions, at the hands of corrupt officers within the Special Anti-Robbery Squad (SARS).

Amnesty has received reports from lawyers, human rights defenders and journalists and collected testimonies stating that some police officers in SARS regularly demand bribes, steal and extort money from criminal suspects and their families.

“A police unit created to protect the people has instead become a danger to society, torturing its victims with complete impunity while fomenting a toxic climate of fear and corruption.

“Our research has uncovered a pattern of ruthless human rights violations where victims are arrested and tortured until they either make a ‘confession’ or pay officers a bribe to be released.

“SARS officers are getting rich through their brutality. In Nigeria, it seems that torture is a lucrative business.”

Amnesty’s report also reveals SARS detainees are held in a variety of locations, including a grim detention centre in Abuja known as the ‘Abattoir’, where Amnesty found 130 detainees living in overcrowded cells.

In addition to its stated remit of tackling violent crime, Amnesty also found that SARS investigates civil matters and in some cases tortures detainees involved in contractual, business and even non-criminal disputes.

In one case in Onitsha, Anambra state, a 25-year-old fuel attendant was arrested by SARS after his employer had accused him of being responsible for a burglary at their business premises.

He told Amnesty: “The policemen asked me to sign a plain sheet. When I signed it, they told me I have signed my death warrant. They left me hanging on a suspended iron rod. My body ceased to function. I lost consciousness. When I was about to die they took me down and poured water on me to revive me.”

Like many people detained by SARS, he was not allowed access to a lawyer, a doctor or his family during his two-week detention.

Yet in various cases where victims of police torture or other ill-treatment attempted to seek justice, the authorities took no action.

When the police force was asked by Amnesty why no officers had been suspended or prosecuted for torture, the police denied that any torture had taken place.

However, one senior officer disclosed that around 40 officers alleged to have carried out various acts of torture and ill-treatment of detainees were transferred to other stations in April 2016. He did not say whether the claims against them were being investigated.

“This lack of accountability creates an environment where SARS officers believe they have carte blanche to carry out acts of torture,

“This is hardly surprising when many of these officers have bribed their way to SARS in the first place. The police chiefs in charge are themselves entwined in the corruption.”

Chidi Oluchi, 32, told Amnesty he was arrested in Enugu before being robbed of his belongings and then tortured in custody by SARS officers.

“They told me to slap myself and, when I refused, they started beating me with the side of their machetes and heavy sticks. My mouth was bleeding and my vision became blurred,” said Chidi, who was released after he paid SARS officers N25,500 ($100) to be freed.

Apart from demanding bribes, SARS officers have been accused of stealing or confiscating property from relatives of detained suspects.  Some family members told Amnesty that SARS officers stole their cars or withdrew all the money from their bank accounts.

The majority of the victims of torture in SARS custody are poor and unable to hire legal representatives. In some cases, when detainees cannot afford to pay bribes, they are simply tortured more.

“Our research has exposed the callous workings of a police squad operating outside of the law and inflicting daily brutality on Nigerians who are often legally powerless to defend themselves against criminal accusations, let alone from the torture meted out by SARS.

“Depressingly, there are scant judicial or any other mechanisms in place to prevent SARS officers from subjecting vulnerable targets to human rights violations for their own financial gain.”

Despite repeated calls from Amnesty in recent years, the Nigerian justice system has failed to prevent or punish torture.

In December 2014, the Nigerian police launched a human rights manual which prohibits torture and other ill-treatment of detainees, but SARS has failed to implement it.

When a new Inspector General of Police was appointed in early 2015 it was announced that there would be reform and reorganisation of SARS, but officers attached to the unit told Amnesty they were not aware of the reforms.

A revised version of a bill to criminalise torture, which was first introduced in 2012 but was returned unsigned by the President, was passed by the House of Representatives in June 2016 and will be resubmitted to the Senate for further debates in 2016.

“With the Nigerian government’s previous attempts at stamping out torture proving completely ineffective, it is time for the authorities to ensure that officers responsible for such human rights violations are finally held accountable.

“Police torture is a stain on Nigerian society that must be addressed with clear orders to law enforcement officers not to inflict torture or other ill-treatment on detainees under any circumstances.

UK police and military support to Nigeria
In February this year, the UK Government announced it was running training in anti-kidnap strategies for the Nigerian police force. The UK also stressed that it would seek assurances from the Nigerian authorities that transfers of equipment, know-how and training for the police do not contribute to human rights violations.

Given these fresh concerns on the police’s human rights record, Amnesty will urge the UK Government to demonstrate how it is ensuring that UK police and military training doesn’t contribute or facilitate any of these types of abuses.

Nigeria is obligated under international and regional human rights law to ensure the prohibition of torture and other ill-treatment..  All victims have a right to reparations, and steps must be taken to ensure that nobody profits from abusing detainees.