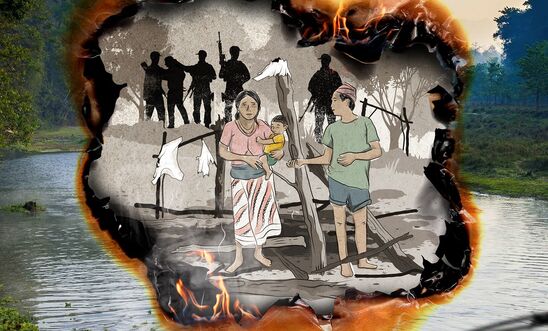 Indigenous people being forcibly evicted from their ancestral lands

The report, Violations in the name of conservation, documents how the establishment of National Parks and other ‘protected areas’ has resulted in tens of thousands of Indigenous people being forcibly evicted from their ancestral lands and denied access to areas they depend on for subsistence.

The report highlights how the enforcement of these policies has led to arbitrary arrest, torture, unlawful killing and forced evictions from informal settlements.

“Nepal is often held up as an exemplary conservation success story. Unfortunately, that success has come at a high price for the country’s Indigenous peoples, who had lived in and depended on these protected areas for generations.

“From the 1970s onwards, Nepal’s governments have adopted an approach to conservation that has forced Indigenous peoples off their ancestral lands and severely limited their ability to access traditional foods, medicinal plants and other resources.

"Heavy-handed enforcement of these policies has subsequently resulted in numerous cases of torture, other ill-treatment and unlawful killings.”

“For almost half-a-century, Indigenous peoples in Nepal have been failed by governments that were constitutionally-bound to uphold their rights.

“To start repairing this damage, Nepal’s authorities must recognise Indigenous peoples’ rights to their ancestral lands and allow them to return.”

National parks and other ‘protected areas’ cover almost a quarter of Nepal, with the vast majority located in the ancestral homelands of Nepal’s Indigenous peoples.

Indigenous people are frequently arrested and detained for entering national parks and reserves. Many have faced ill-treatment and torture at the hands of army personnel deployed in the parks.

Some have died as a result, including 26-year-old Raj Kumar Chepang, who died after being beaten by army officers in Chitwan in July 2020.

Decades after the establishment of ‘protected areas’, many Indigenous people who were evicted remain landless, and at risk of further forced evictions from the informal settlements where they now live. They have not been provided access to alternative livelihoods, or compensation for their losses.

On 18 July last year, authorities at Chitwan National Park forcibly evicted 10 families from the Chepang community, who had been displaced due to floods and landslides and were living in a ‘buffer zone’ - an area designated to provide local people with access to forest resources - outside the park boundary.

The park had given the families a verbal notice only a week before the eviction, contrary to international standards and requirements under Nepal’s Housing Act. An official investigation into the incident was launched by the Ministry of Forests and Environment later that month - despite repeated requests, Amnesty and CSRC have not yet received any information about the investigation.

In Bardiya National Park, some Indigenous peoples continue to pay a land revenue tax, despite not having had access to their land for decades, after floods and a change in the river course resulted in the land being considered part of the national park. They told Amnesty and CSRC that they continue to pay in the hope that they will once again be able to access their land, and because receipts are required to claim compensation for crop damage.

Nepal’s National Parks and Wildlife Conservation Act restricts hunting, grazing, tree cutting, land cultivation or forest use, and bans all building in a national park or wildlife reserve – all measures which have severely impacted Indigenous peoples’ way of life.

Due to lack of alternative livelihoods and financial hardship, many Indigenous peoples evicted from their land have been compelled to become sharecroppers, cultivating other people’s land in return for 50 per cent of the harvest.

This system, which is governed by social rather than legal norms, has significant human rights implications. Locals interviewed by Amnesty in Banke and Bardiya districts reported that they frequently experienced exploitation by landlords, including having to do household work, or collect fodder and fuel wood without payment.