The Nepali government’s failure to crack down on recruitment agencies charging illegal fees for jobs abroad is leaving migrant workers trapped in a vicious cycle of debt and exploitation, Amnesty International said today (18 December). New research has found that almost two-thirds of Nepali migrant workers who responded to a survey, carried out in Nepal and Malaysia, had paid excessive, illegal recruitment fees. James Lynch, Deputy Director of Amnesty International's Global Issues Programme, said: “Nepali migrant workers are being systematically and mercilessly set up. Forced to take out loans 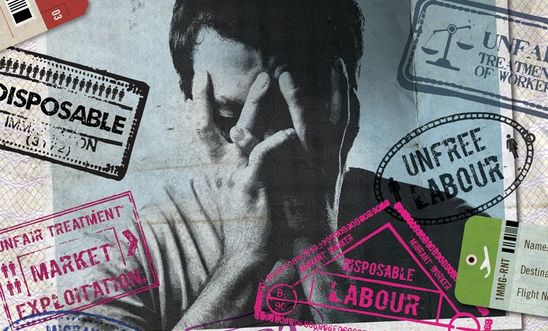 The Nepali government is failing to address rampant deception and extortion in the country’s labour recruitment business, putting migrant workers at risk of forced labour abroad and leaving them with crippling debts, according to a report published today by Amnesty International today. Amnesty researchers interviewed 127 Nepali migrant workers and dozens of government officials in 2016 and 2017, in eight districts of Nepal, for the 88-page report Turning People into Profits: Abusive Recruitment, Trafficking and Forced Labour of Nepali Migrant Workers. Almost all of the workers had been subject

Amnesty: UK must not bow to pressure from Nepal over prosecution decision

The arrest in the UK of a Nepali man on allegations of torture is a welcome indication of the UK’s readiness to comply with its international obligations in combating torture. It could also be an important step for victims failed by the Nepali justice system Amnesty International said. On Thursday, UK police arrested a 46-year man, reportedly a high-ranking army official, on suspicion of torture of detainees in 2005, during Nepal’s civil war. Polly Truscott, Amnesty’s Deputy Asia-Pacific Director, said: “This arrest may prove to be a welcome step towards accountability, but it also really

Rogue Nepalese recruitment agencies are trafficking Nepalese for exploitation and forced labour in the Gulf States and Malaysia, Amnesty International said today in a new report, as it called on the Nepalese government to improve protection of its migrant workers. False Promises: Exploitation and forced labour of Nepalese migrant workers highlights the fate of prospective migrants who take out large loans to pay recruitment fees to secure a job overseas, unaware that recruitment agencies are deceiving them about the work, pay and conditions they are signing up to. Amnesty International

International and local human rights organisations have today urged the Nepali authorities to stop obstructing criminal proceedings over the alleged torture and murder of 15-year-old Maina Sunuwar by four army officers. An open letter to the Attorney General of Nepal, Professor Bharat Bahadur Karki, on the sixth anniversary of Maina Sunwar’s death, calls on him to end ongoing obstructions to bringing the officers to trial. They are accused of subjecting Maina to prolonged simulated drowning and electrocution with a 220-volt current, which led to her death. Her body was secretly buried but

On 16 December the United Nations, the Nepalese Government and Unified Communist Party of Nepal-Maoist (UCPN-M) signed a plan which hopes to release 3,000 child soldiers who served in the Maoist army during the country’s decade-long...

Nepal: UN major charged with torturing girl to death must be arrested

Amnesty International calls for arrest of soldier charged with 15-year-old’s death Amnesty International today demanded the immediate arrest of an army major accused of torturing a 15-year-old Nepalese girl to death.Major Niranjan Basnet is charged with murdering Maina Sunuwar on 17 February 2004. She died in military custody after she was subjected to electrocution and drowning during interrogation. Her body was later exhumed from an army barracks where Nepali UN peacekeepers are trained. A military court convicted the other three soldiers in 2005, but only on minor charges following a ruling

Unreported World shows the persecution of widows in Nepal

Unreported World meets the widows of Nepal in the Channel 4 programme at 7:35 pm on Friday 13 November 2009. The title of the film is Nepal: The Living Dead. You can also read the Reporter's Log by Yemi Ipaye.

Nepal: Torture of woman included threat to put poisonous lizards in her clothes

Amnesty International is making urgent representations to the Nepalese authorities about the case of a woman who was allegedly tortured in police custody, including by being threatened with having poisonous lizards put inside her clothes.The woman, Sumitra Khawas, was being questioned on 10 September about the alleged murder of her husband when - she claims - a police inspector and two other officers tortured her for at least two hours to make her sign a confession to the murder.The torture allegedly involved being beaten with the inner tube from a car tyre and punched repeatedly all over her