Myanmar: 'Shocking killings' by police in Rakhine State must be investigated 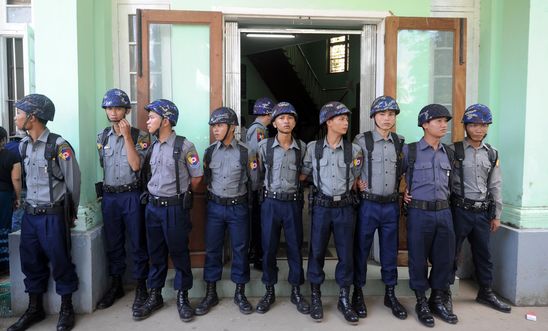 Members of the Myanmar Police, pictured in 2014.

“These shocking killings are yet another example of Myanmar security forces’ contempt for human life.

“Even if protesters were throwing stones and bricks, nothing can justify police apparently firing into a crowd of thousands. This is a clear case of excessive use of force in violation of the right to life.

“The lethal use of force must be independently investigated, and those responsible held to account. Far too often, police in Myanmar are allowed to escape unpunished after committing violations, allowing the cycle of impunity and abuse to continue.

“The Myanmar authorities have a long and chequered history of using any means necessary to curb expressions of dissent. It is high time the Myanmar police better train and equip their staff in non-violent methods of crowd control.

“In particular, the authorities need to ensure that police have non-lethal means of force at their disposal to use where unavoidable.”