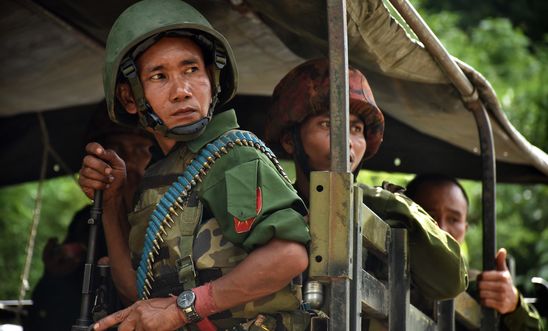 The Myanmar military is still committing atrocities against ethnic minorities in the north of the country, with civilians suffering most during offensives against multiple armed groups, Amnesty International said today as it published newly-gathered evidence.

Amnesty’s 44-page report, Caught in the middle: Abuses against civilians amid conflict in Myanmar’s northern Shan State, details harrowing conditions as civilians have been arbitrarily arrested, detained and tortured by the military.

It also highlights the abusive tactics used by ethnic armed groups as they confront the military and each other to exert control in the region. The conflicts show no sign of abating, raising the prospect of further human rights violations.

Amnesty’s report shows war crimes and other military violations have been committed against ethnic Kachin, Lisu, Shan, and Ta’ang civilians during two field missions to the region in March and August this year.

Civilians who spoke to Amnesty repeatedly implicated the military’s 99th Light Infantry Division in many of the violations. Soldiers from this division were responsible for some of the worst atrocities against the Rohingya in Rakhine State from August 2017 onwards, as well as in war crimes and other serious violations in northern Myanmar in 2016 and early 2017.

Soldiers have detained civilians – overwhelmingly men and boys – often torturing or subjecting them to other forms of ill-treatment. Most were accused of having links to specific armed groups based solely on their ethnicity, a sign of the climate of suspicion, discrimination and arbitrary punishment that Kachin, Shan, Ta’ang and other ethnic minority communities face at the hands of the Myanmar military. The military has also fired indiscriminately in civilian areas, killing and injuring civilians, as well as damaging homes and property.

“The Myanmar military is as relentless and ruthless as ever, committing war crimes against civilians in northern Shan State with absolute impunity.

“Soldiers – and more importantly commanders – are subjecting civilians to the military’s hallmark brutality in the absence of any form of accountability.

“Wherever the 99th Light Infantry Division is deployed, we see similar patterns of abuse and the commission of horrific crimes unfold. This highlights the urgency of international action to hold Myanmar’s military – not least its senior generals – accountable.”

Violations have continued even after the military announced a unilateral ceasefire, since lapsed, last December. A recent escalation of fighting in the region – which the government has linked to illegal drug trafficking but which ethnic armed groups attribute to ongoing military offensives – has brought new reports of human rights abuses.

On 11 March, soldiers from the 99th Light Infantry Division detained and tortured two ethnic Kachin villagers in Kutkai Township. While the men were away fishing, fighting broke out between the military and the Kachin Independence Army (KIA).

One of the men, 35, said: “[A soldier asked] ‘Are you KIA?’ I said ‘no’, then they started punching and kicking me. They forced me to take off my clothes [and] held a knife to my neck… Then they forced me to squat with my fingers on my knees… They told me if I moved they would cut off my fingers… They put a grenade in my mouth… I was afraid if I moved it would explode.”

In some cases, detainees were taken to military bases where they were held incommunicado for up to three months, and denied access to family and lawyers. In one case documented by Amnesty, an 18-year-old man and a 14-year-old boy were subjected to forced labour, including digging trenches, while being held at a military base in the town of Kutkai.

Before being taken to the base, the 18-year-old was beaten and then tortured further. He said: “They asked if I was a [KIA] soldier… I kept saying no, then they put a plastic bag over my head [and] tied it tight by holding it in the back. They were asking me if I knew any soldiers from the village. They did it six or seven times, each time for two or three minutes. I couldn’t breathe.”

These short-term displacements can make it difficult for humanitarian workers to access people in need, a situation made worse by government and military restrictions on humanitarian access. Even those who flee are not safe, with an alarming increase since last year in the number of civilians killed or injured by landmines or improvised explosive devices.

“Those responsible for war crimes should face justice, all the way up to Senior General Min Aung Hlaing, the Myanmar military’s Commander-in-Chief.

“Fighters and commanders in ethnic armed groups should also be investigated and held accountable for war crimes.

“For too long the UN Security Council has stood by as civilians were abandoned to a ceaseless cycle of violence. It is time for the Council to stop dragging its feet and refer the situation in Myanmar to the International Criminal Court.”

Civilians are increasingly being caught between ethnic armed groups who abduct, detain and sometimes torture men and boys, often accusing them of supporting a rival armed group. Amnesty has documented such abuses by the Kachin Independence Army, the Shan State Army-North, the Shan State Army-South, and the Ta’ang National Liberation Army.

Armed groups have also subjected civilians to forced labour. Amnesty has documented several instances when civilians were forced to work as porters, carry fighters’ belongings, or guide them to other villages during active combat, putting their lives at risk. Civilians also told Amnesty that armed groups regularly extort food and money from them, threatening anyone who refuses with physical violence.

“Armed groups are responsible for heinous abuses against civilians, including abductions, forced labour and beatings. We are calling on all sides to stop targeting civilians, and to take all possible measures to keep fighting away from populated areas.”

Amnesty is calling on all sides to respect international humanitarian and human rights law, protect civilians, and ensure humanitarian access. Armed groups must end acts of violence and intimidation against civilians and take all feasible measures to avoid civilian-populated areas.