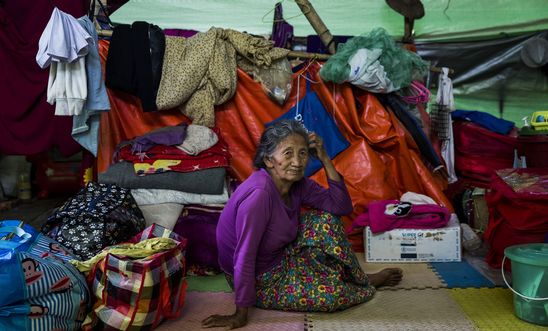 Tens of thousands of older women and men from ethnic minorities across Myanmar are being let down by a humanitarian system that fails to adequately address their rights and needs, Amnesty International said in a report published today.

The 94-page report, ‘Fleeing my whole life’: Older people’s experience of conflict and displacement in Myanmar, is Amnesty’s first comprehensive investigation into the specific ways older people’s rights and dignity are not respected during armed conflict and crisis, as well in the provision of humanitarian assistance.

The report is based on 146 interviews with people from a range of ethnic minority groups aged between 54 and 90, people who have endured atrocities after being forced to flee their homes following the 2017 military crackdown.

“For decades, Myanmar’s ethnic minorities have suffered recurrent abuse at the hands of the military. Many older people racked by atrocities amid recent military operations lived through similar crimes as children or younger adults. Their experience lays bare the military’s longstanding brutality, and the need for justice.

“Tens of thousands of older women and men are among the more than one million people displaced to camps as a result of conflict and military abuse. The humanitarian community has responded admirably to crisis after crisis, saving many lives.

“But older people are slipping through the cracks, their specific needs often overlooked. The humanitarian response must become more inclusive.”

As the Myanmar military has committed atrocities during punishing operations in Kachin, Rakhine and Shan States, older people have been placed at risk. Some older people have stayed behind as villages emptied because of military advance, often due to their strong ties to their home and land, or being physically unable to flee. Soldiers have arbitrarily detained, tortured, and at times killed older women and men.

During the military’s attack on the Rohingya in 2017, many older women and men were burned alive in their homes. Mariam Khatun, an ethnic Rohingya woman around 50 years old, fled to the nearby forest with her three children when Myanmar soldiers entered her village in Maungdaw Township.

She said: “My parents were left behind in the home. I had two young children, how could I take them as well? My parents were physically unable to move.”

As she and her children reached the river next to the village, Mariam Khatun looked back and saw the village burning, knowing her parents were still inside their home.

A 67-year-old ethnic Rakhine farmer who stayed behind when most of his village fled in March this year, partly because a severe hearing impairment meant he had not heard nearby fighting between the military and the Arakan Army (AA), said he was beaten by Myanmar soldiers who forced him out of his home.

He said: “When I got to where the captain was, the soldiers tied my hands behind my back, with the rope that’s used for cattle. They asked me, ‘Did the AA come to the village?’ I said no, I’d never seen [the AA]… and then the soldiers beat me.”

For older people in Rakhine and Kachin states who fled, the journey through Myanmar’s mountainous borderlands was often extremely difficult, worsened by the military blocking main routes and restricting humanitarian access. Amnesty documented several cases of older people dying as they tried to flee to safety, unable to access health care.

For many older people from ethnic minorities across Myanmar, the current displacement is the latest in a lifetime of conflict and military oppression.

Amnesty interviewed several dozen older people who had fled their homes three or more times – often as children, as younger adults, and again in older age. The repeated upheaval has caused economic hardship in addition to psychosocial harm.

Nding Htu Bu, a 65-year-old Kachin woman living in an internally displaced persons (IDP) camp, said: “I’ve fled so many times since I was nine years old… I’ve had to be alert all the time. It doesn’t matter what I do – on the farm, in the orchard – I’ve never had peace of mind.”

Some older people have also witnessed one or more of their children being raped or murdered by the Myanmar military. Yet, despite the chronic harm this causes, very little psychosocial care has been targeted at helping older people.

UN agencies and humanitarian organisations have responded to enormous needs in Bangladesh, where more than 900,000 Rohingya live in camps, and in Myanmar, where more than 250,000 people are displaced. Insufficient donor funding and government restrictions in both countries have created further challenges. But even amid the constraints, the humanitarian system has frequently neglected older people.

In the Bangladesh refugee camps, many older Rohingya women and men are unable to regularly access the most basic of services, including sanitation, health care, water and food. The camps’ congestion and hilly terrain make for a difficult environment, particularly for older people with limited mobility. Many older Rohingya report being unable to access shared toilets and instead have to use a pan in their shelters.

Mawlawi Harun, an ethnic Rohingya man in his 90s currently in a camp in Bangladesh, said: “I go to the latrine here, I eat and sleep here. I have become like a cow or goat. What more can I say? Cows defecate and urinate in the same place where they eat… Now I’m sleeping in a latrine.”

Older women and men are also struggling to access health facilities, due to the distance and terrain. Even when they can, it is commonly the case that clinics cannot treat chronic diseases – such as high blood pressure and serious respiratory illness – that disproportionately affect older people. Many older people are forced to buy medication from market stalls that should be part of the health response.

Gul Bahar, around 80-years-old, said she spends 5,000 taka (approximately £45) per month on medication, including pills for high blood pressure, as the camp clinic near her generally provides only paracetamol. To pay for her medication, she said: “We sell part of our food ration and cooking oil. We also sold our blankets”.

In northern Myanmar, where many ethnic Kachin have been displaced since 2011, older people also currently face discrimination in accessing work. Zatan Hkawng Nyoi, a 67-year-old ethnic Kachin woman who spent a lifetime farming before being displaced, said: “I’ve approached the employers and said I want to work. They said I’m too old, that I won’t be able to walk that far to [the paddy fields].”

Older people in general, and older women in particular, are also under-represented in camp leadership, denying them a voice in decision-making.

“Older people need to be better included in all aspects of humanitarian response – from having their voices inform initial assessments to being involved in assistance programmes. Responding more effectively to older people’s rights begins with engaging their unique skills and perspective.

“Older people’s rights should inform humanitarian response and resourcing from a crisis’s first days, not as an afterthought. Anything else fails to meet core humanitarian principles: respond based on need, and leave no-one behind.

“For their part, donor governments must provide greater support for the response in both Myanmar and Bangladesh and ensure that implementing partners are assessing and meeting older people’s specific needs.”

Amnesty’s review of lists of people killed from different Rohingya villages indicates older people have often suffered disproportionately. A quantitative study by Médecins Sans Frontières found similar, showing that in the month after the military began its brutal operations on 25 August 2017, the highest rates of mortality – by far – were among Rohingya women and men age 50 and older.

Amnesty’s report is based on 146 interviews with older women and men from the Kachin, Lisu, Rakhine, Rohingya, Shan, and Ta’ang ethnic minorities. They were conducted during three research trips to Myanmar’s Rakhine, Kachin and northern Shan States, as well as to refugee camps in southern Bangladesh, between December 2018 and April 2019. Those interviewed range from 54 to more than 90 years old.

Amnesty requested responses from the Bangladesh offices of the UN Refugee Agency and the International Organisation for Migration to questions about the report’s main findings. Both agencies cited challenges, especially during the early crisis period; the enormous progress in the overall provision of aid; and initiatives that are underway or planned to make assistance more inclusive for older people.