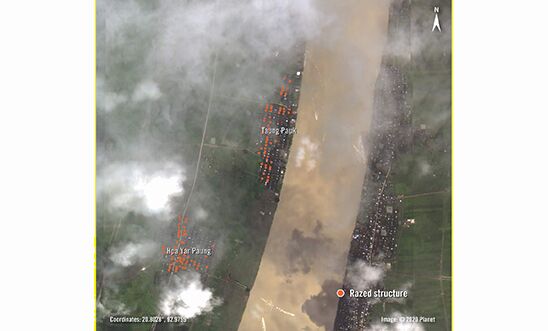 Over 120 structures in Taung Pauk and Hpa Yar Paung appear burned in Planet imagery from 10 September 2020. Fires were remotely detected in the villages with satellite sensors on 3 September 2020.

Amnesty International has gathered new evidence of indiscriminate attacks on civilians in Rakhine State, amid serious escalations in the ongoing armed conflict between the Myanmar military and the Arakan Army (AA).

This evidence is based on first-hand testimony, photographs and video obtained from inside Rakhine State, analysis of satellite imagery as well as media reports and information from local human rights groups. Witnesses’ names have been changed.

“There are no signs of the conflict between the Arakan Army and the Myanmar military abating – and civilians continue to bear the brunt.

“The Myanmar military’s utter disregard for civilian suffering grows more shocking and brazen by the day. The UN Security Council must urgently refer the situation in Myanmar to the International Criminal Court.

"The international community must raise the alarm about the situation in Rakhine State now, or face questions later about why they failed to act – again.”

Amnesty is also concerned at recent reports of an increased presence of Myanmar military troops along the Myanmar-Bangladesh border. Images of anti-personnel landmines found in a civilian area were analysed by Amnesty’s weapons expert and identified as the MM2 type landmine often used by the Myanmar military. This device is larger than most anti-personnel landmines, and inflicts severe damage.

Both the Arakan Army and Myanmar military use anti-personnel devices, and for this reason establishing provenance with absolute certainty is not always possible. Current access restrictions prevent on-the-ground documentation efforts by Amnesty too.

Several incidents involving civilians injured or killed by landmines have been credibly reported in Rakhine and Chin States in recent months by local civil society and media outlets.

One of the most recent instances was on 18 September , when a 44-year-old Chin woman stood on a landmine while collecting bamboo shoots near the Myanmar military’s Light Infantry Battalion 289 base in Paletwa. She died of her injuries shortly after.

On the morning of 8 September 2020, Maung Soe was at work near his village of Nyaung Kan in Myebon Township when he heard heavy weaponry. He said:

“I didn’t think it could be our village. I thought it was somewhere else. I tried to call my wife and she wasn’t answering. I went to the village and I heard some people got injured. When I got home, my wife and my daughter were laid down on the floor.

“[My wife] was not saying anything. I tried to check my [seven-year-old] daughter and she was still alive. I picked up my daughter and tried to get out.

“Even after my daughter passed away, I could still hear the weapons coming… I had to run away, leaving my daughter’s body. I came back later when they stopped shooting.”

Maung Soe says there were no Arakan Army fighters in Nyaung Kan. Villagers believe the heavy weaponry was fired from a Myanmar military base.

The shelling at Nyaung Kan village in Myebon Township claimed the lives of five people, including Maung Soe’s wife and daughter. All were from the Rakhine ethnic group, and two were seven-year-old children. Ten others were wounded in the attack.

According to one local human rights group, the number of civilians killed in this conflict since December 2018 in Rakhine and Chin States stands at 289, with 641 injured. The true figure cannot be independently verified, as a mobile internet shutdown and broader government crackdowns on media reporting have impeded documentation efforts in conflict-affected areas.

However, in July 2020, Amnesty was able to document indiscriminate airstrikes and shelling by the Myanmar military, killing or injuring civilians, including children.

On 14 September, UN High Commissioner for Human Rights Michelle Bachelet told the Human Rights Council that in some recent cases in Rakhine State, civilians “appear to have been targeted or attacked indiscriminately, which may constitute further war crimes or even crimes against humanity.”

One witness, villager U Kyaw Tin, told Amnesty that he was walking with his cow when the Myanmar military launched an assault on Hpa Yar Paung. He said:

“[They] started shooting, they entered the village. I didn’t know exactly where the shooting came from … We were trying to run to the other side. We didn’t really see what exactly was going on, because we all were running.”

He said that it appeared the village was closed in on by the Myanmar military from two directions.

A spokesperson for the Myanmar military, Major General Zaw Min Tun, told journalists a police vehicle was attacked by the Arakan Army with a remotely detonated improvised explosive device (IED) near the village.

Later, the Myanmar military were seen arresting two Rakhine men from the village that evening. Their bodies were reportedly found near the river with gunshot wounds the next morning. They have since been transported by the military for postmortem in Kyauktaw. The Myanmar military told the media “two enemy bodies and a gun” were seized from the site.

U Kyaw Tin told Amnesty: “After they finished the arson attack they went to another site near the hill and they started to also attack there.”

Satellite image analysis has found that over 120 structures in the ethnic Rakhine-populated villages of Taung Pauk and Hpa Yar Paung villages in Kyauktaw Township appeared burned to the ground, in imagery captured on 10 September 2020.

Amnesty also examined satellite sensor data from 3 September which showed thermal anomalies. Additionally, Amnesty analysed a video of the charred village of Hpar Yar Paung, recorded on 4 September from a passing vehicle, which revealed a ground-level snapshot of extensive destruction. All three sources appear consistent with reports of the blaze on the night of 3 September 2020.

U Kyaw Tim said around 80 houses were completely destroyed, and over 90 damaged. Hpar Yar Paung’s 500 residents are now displaced inside the township, dependent on aid from Rakhine human rights groups in Kyauktaw town.