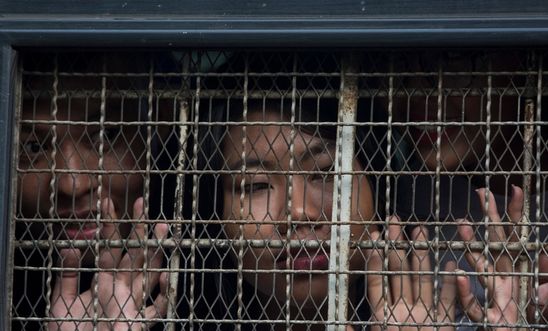 Kay Khaing Tun, a performer from the Peacock Generation group, looks out from a prison van window © AFP via Getty Images

The report, “I will not surrender”: The criminalisation of human rights defenders and activists in Myanmar, features 16 cases of human rights defenders and civil society activists who have been arrested, prosecuted, and imprisoned over the past 18 months. They include students, a journalist, satirical performers, an environmental activist, a labour rights activist and trade union members, and a Buddhist monk, in cases that span nine states and regions across Myanmar.

“Four years after Aung San Suu Kyi came to power, Myanmar remains a country where the slightest criticism of the authorities can land you in jail. Environmental activists, poets and students are among those who have been arrested and prosecuted simply for expressing their opinions.

“After campaigning for human rights for decades and paying a high price for their own activism, it is shocking that Aung San Suu Kyi and her colleagues have done so little to change military-era laws that are still being used to repress and punish critics.

“It’s deeply alarming that the authorities are continuing to use repressive laws to arrest and detain activists and journalists amid a global pandemic. This has to stop. We call on the authorities to immediately institute a moratorium on the use of such law. No one should be arrested or imprisoned under these laws until such time as they can be repealed or amended in line with international human rights standards.”

Just last month, five student activists were imprisoned for protesting against a government-imposed internet shutdown in Rakhine and Chin States, western Myanmar. Two others are in hiding, fearful of arrest and imprisonment under similar charges. The internet shutdown remains in effect, despite authorities confirming a COVID-19 outbreak in recent weeks. The authorities have justified shutting down internet access because of intense fighting between the Myanmar military and the Arakan Army, an ethnic Rakhine armed group. Amnesty is concerned the shutdown will hinder people’s access to important information about the pandemic.

Police are investigating environmental activist Saw Tha Phoe after he helped a local community in Kayin State, southeastern Myanmar to raise its concerns about the environmental and social impacts of a local cement factory.

He has been charged with “incitement” and is currently in hiding, fearful of arrest. He faces up to two years in prison if found guilty.

Meanwhile Aung Marm Oo, editor of Development Media Group (DMG), a news agency that has been reporting on war crimes during the conflict between the Myanmar military and the AA, is facing five years in jail. He stands accused of violating Myanmar’s Unlawful Associations Act, a repressive law often used to target the country’s ethnic minorities.

In early May 2019 Aung Marm Oo went into hiding after learning of the charge against him in another media outlet. Soon after, police officers, including from Special Branch, visited his offices and home, interrogating his family members and staff.

In March this year, the Myanmar Ministry of Transport and Communications directed all telecommunications operators in Myanmar to block access to DMG’s website, together with others accused of disseminating “fake news”.

As Myanmar prepares for elections currently scheduled for November 2020, Amnesty urges the authorities – both the NLD-led government and the military – to stop harassing human rights defenders, activists and critics. They should also ensure necessary reforms so that everyone in Myanmar can freely exercise their human rights including their rights to freedom of expression, association, and peaceful assembly.