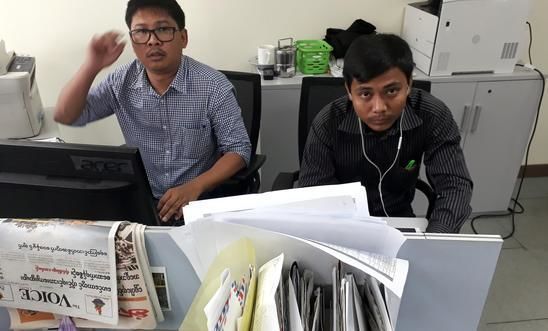 “Today marks an important victory for press freedom in Myanmar. The case against Wa Lone and Kyaw Soe Oo was a travesty of justice from start to finish and they should never have spent a day in prison.

“While all those who campaigned for their release welcome the government’s decision, the reality is the country retains a range of repressive laws used to detain journalists, activists and any perceived critic of the authorities. Until these laws are repealed, journalists and activists remain under a permanent threat of detention and arrest.

“In recent weeks, Amnesty International has recorded a surge in politically motivated arrests – most for criticism of the military. The government must follow through its rightful decision to free Wa Lone and Kyaw Soe Oo by releasing all other journalists and prisoners of conscience detained on hollow charges, and by repealing all laws that keep a chokehold on freedom of expression.”

Reuters journalists Wa Lone and Kyaw Soe Oo were arrested in Yangon, on 12 December 2017. At the time, the two were investigating a massacre of 10 Rohingya men and boys committed by members of the Myanmar security forces in northern Rakhine State, for which seven Myanmar soldiers were later jailed by a military court.

The two journalists were charged with breaching the Official Secrets Act and on 3 September 2018 sentenced to seven years in prison. An appeal to the Yangon High Court was rejected in January 2019.

On 16 April 2019, Wa Lone, Kyaw Soe Oo and their colleagues were award the 2019 Pulitzer Prize for international reporting.

Recent weeks have seen an alarming spate of politically motivated arrests and detention. These include:

These arrests are made possible by a range of repressive laws, which have for years been used to silence critical voices. To date, the NLD-led government – and parliament – has largely failed to take action to repeal or amend those laws that are incompatible with international human rights laws and standards. Instead, both the government and the military have actively used such laws to curb freedom of expression, association and peaceful assembly.