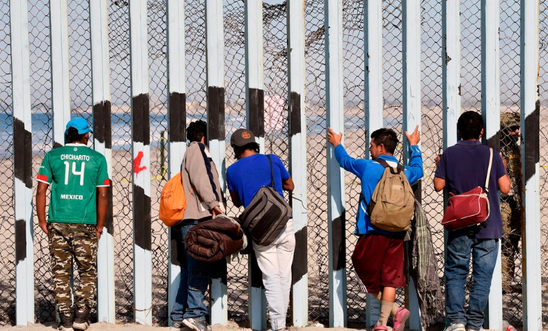 Interviews with 200 people travelling as part of the migrant caravans

“If Mexico agrees to do the US government’s dirty work, it is effectively paying for Trump’s shameful border wall” - Erika Guevara-Rosas

Unlawful US border policies are leaving thousands of asylum-seekers stranded in Mexico and facing deportation to countries where they could face serious harm, Amnesty International warned in its latest report.

The report – Americas: Stuck at the door – reveals the appalling situation facing refugees and migrants stranded in Mexico.

Between October and November this year, Amnesty interviewed approximately 200 people travelling in the caravans – including numerous families, women travelling with children and LGTBI individuals – as well as governments across the region and international and civil society organisations.

The research found that asylum-seekers had experienced unsanitary conditions, unlawful asylum waitlists, restricted entry and risk of deportation as a result of unlawful US border policies.

“The governments of Mexico and Central America must take urgent action to ensure they do not suffer further human rights violations.

“If Mexico agrees to do the US government’s dirty work at the expense of the caravan members’ dignity and human rights, it is effectively paying for Trump’s shameful border wall.”

On 18 November, Amnesty visited the city of Tijuana’s Benito Juarez sports complex, a temporary shelter where the municipal government had accommodated approximately 3,000 migrants and asylum-seekers who had arrived in the first of several caravans. They joined thousands of other people the US authorities have forced to wait in Tijuana for weeks or months before allowing them to request asylum at the border.

Mexican officials admitted the sports complex lacked sufficient food, water and health services, and that respiratory illnesses were spreading among those there.

Meanwhile, at the Tijuana side of the San Ysidro port of entry, a quasi-official asylum waitlist requires asylum-seekers to put their names down before requesting asylum directly at the border. The list is jointly coordinated by the asylum-seekers themselves and the Mexican authorities as a response to the US imposing limits on the number of asylum-seekers it will receive each day. Anyone without identity documents is prohibited from joining the list and if they miss the day their number is called, they risk losing their places entirely.

When Amnesty reviewed the list last week it contained the names of around 4,320 people, including about 2,000 caravan members, mostly from Honduras, who had arrived since 15 November. Those already on the list had been waiting about five weeks in Tijuana before the US authorities started processing their asylum claims.

The Mexican authorities cannot lawfully prevent people from exiting the country and seeking asylum at the US border. Yet multiple sources in the Mexican government confirmed that Mexican immigration officials routinely coordinate with the US border authorities over how many asylum-seekers from the list will be received each day.

Meanwhile, on 22 November, US Secretary of State Pompeo said that the US government planned to unlawfully deny people their to pursue asylum applications by flatly refusing to allow entry into the USA of people from the caravans.

Asylum-seekers at risk of deportation

Last week, Tijuana’s municipal police force announced it had detained 34 caravan members for “public disorder” (including drinking beer on the street) and transferred them for potential deportation. Unverified reports suggest that the police may have racially profiled and entrapped some of them, and that their detention resulted in their separation from family members at the Benito Juarez sports facility.

Meanwhile, local media in Tijuana have reported that 40 caravan members had been detained by municipal police and then deported. This detention is part of a wider trend in recent days, with several mass detentions across Mexico in response to the caravan, including of families and children. In some cases, the number of people detained has reached the hundreds.

On 25 November the Mexican authorities said that some of those who tried to cross into the United States would be met with teargas and deported. Deporting people to countries were their lives are at risk, without giving them the chance to seek asylum, would violate Mexican and international law.

Amnesty has issued 26 recommendations to the US and Mexican governments and other Central American countries to ensure human rights protections and humanitarian support for all those seeking asylum.